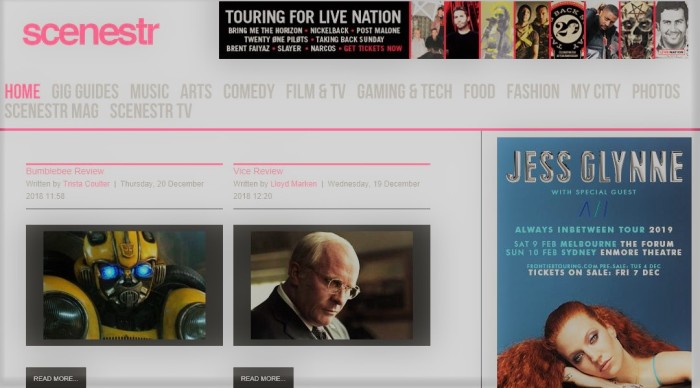 I am a big fan of director/writer Adam McKay so I was very happy to get to review his latest Vice for Scenestr magazine. I attended a preview screening with Karen at New Farm cinemas with the customary meal afterwards at the nearby Pig’n’Whistle pub. Such evenings have occurred enough that they’re becoming a habit, a fact I hope continues am very grateful for. I also ran into someone who I knew years ago as a teenager at an after school drama group. He’s since become a reality TV star and is heavily involved in media and attending all kinds of social engagements around town. He’s doing well and it was nice to get to talk to him.

As for the movie, I think this is a less flashy follow-up to The Big Short but cut from the same cloth. You can read more of my thoughts here http://scenestr.com.au/movies-and-tv/vice-review-20181219 I was really keen to see this film and so look forward to hearing your thoughts. The trailer that got me so excited is below.

Produced by Eyeball Media Enterprises Scenestr is an online national magazine with local offices around Australia. Celebrating 25 years in 2018 of publishing history they’ve excelled at moving into the digital realm but they remain at heart from the streets. They still publish magazines in print for Western Australia, South Australia, New South Wales, Queensland and now Victoria! every month too.