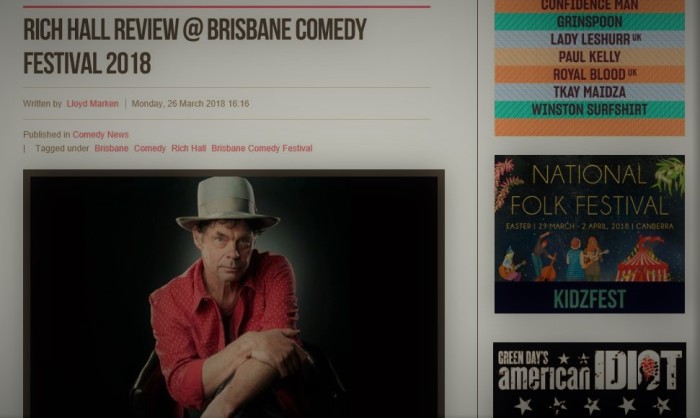 I was lucky enough to get to review some shows I wanted to see at the Brisbane Comedy Festival for Scenestr magazine. In addition to the new show Animated! from Impromafia I was able to go along to see Rich Hall perform at the Brisbane Powerhouse This is a man whom I have watched perform on television over the years and always enjoyed. The name may not be instantly recognisable but that face and voice are and he has had quite a long and successful career. His latest show saw him in fine form and you can read more of my thoughts here http://scenestr.com.au/comedy/rich-hall-review-brisbane-comedy-festival-2018-20180326

Produced by Eyeball Media Enterprises Scenestr. is an online national magazine with local offices around Australia. Celebrating 25 years in 2018 of publishing history they’ve excelled at moving into the digital realm but they remain at heart from the streets. They still publish magazines in print for Perth, Adelaide, Sydney and Brisbane every month. If you’re into music they’re a great read but they do cover all of the arts including festivals, stand-up comics, fashion, theatre and film. I feel very fortunate to get to write for them.