Me with the first print issue of Frooty. Copyright Lloyd Marken.

I am proud to announce that I was published in the very first print issue of Frooty magazine. Frooty was founded as an online magazine in 2017 by the Arts/Comedy Editor for Scenestr Jesse Chaffey.

Jesse edits the bulk of my published pieces for Scenestr as well as so many others. He’s rescued me a few times, regularly made my pieces look better, taken on board anything I thought was important to keep and it is a fragment of what he does as an editor working long hours relentlessly. Like all members of staff at Scenestr, he’s talented, hard working and passionate about what he does. The fact he created Frooty the same year he as a recent graduate started as the Arts/Comedy editor for Scenestr speaks volumes and let’s not forget Scenestr has also grown in the same time frame moving into print in Western Australia and Melbourne.

My contribution to Frooty Issue 1 is a review I wrote on page 17 for Rocketman that was originally published online at Scenestr.

You can read a digital version of the print issue here https://frooty.com.au/read/issue-01/FROOTY-01.html#p=17 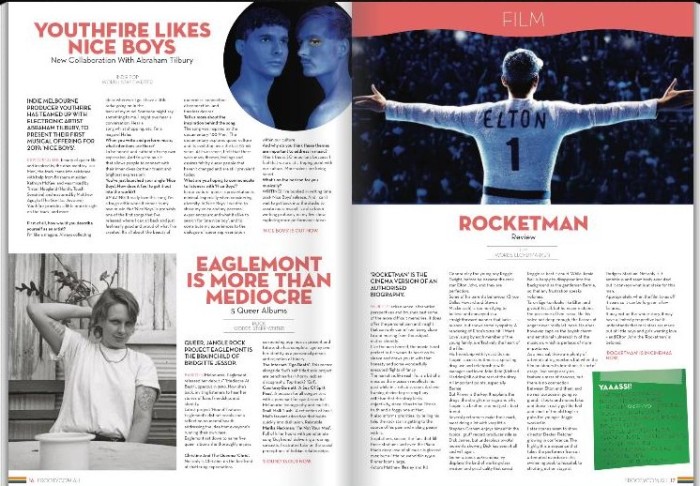 Started in 2017 and produced by Eyeball Media Enterprises, Frooty is an online national magazine that covers news and entertainment with a queer perspective. They have just done their first print issue with more to come.