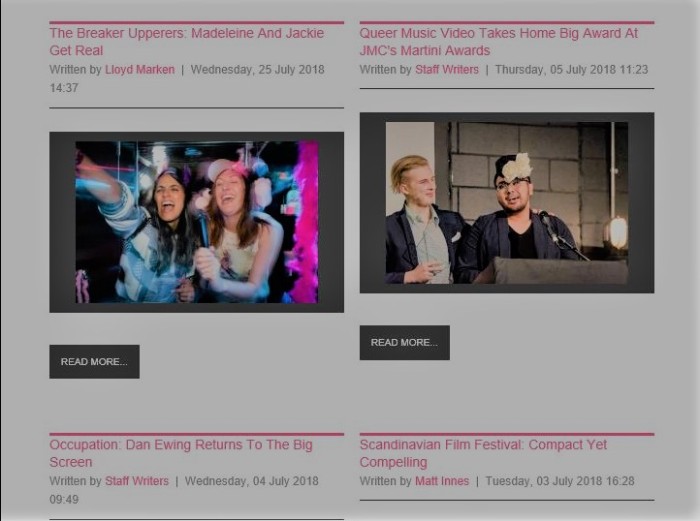 Following on from the wonderful opportunity to attend a critic’s screening of The Breaker Upperers I got a chance to interview both Jackie van Beek and Madeleine Sami whom co-wrote and co-directed the film in addition to playing the leads. This was my first chance to interview feature film directors and was a real treat to discuss the film with them having already seen it. While I have my misgivings about the second half I was eager to discuss this with them (as writers) because I think the themes they were communicating were a new take and very important to them. This proved to be true and was very exciting to hear them talk about the choices they made and why and hopefully I bring that across in my published piece. Hearing them talk about their approach as directors with their own acting experience was inspiring too. Beyond that, these are two remarkably talented artists and funny women and I wish them the best in future endeavours. The chance to review the film which I enjoyed and interview the two thoughtful and hilarious people behind it was a real treat thanks to my work for Scenestr. You can check out the interview here http://scenestr.com.au/movies/the-breaker-upperers-madeleine-and-jackie-get-real-20180725

Produced by Eyeball Media Enterprises, Scenestr is an online national magazine with local offices around Australia. Celebrating 25 years in 2018 of publishing history they’ve excelled at moving into the digital realm but they remain at heart from the streets. They still publish magazines in print for Perth, Adelaide, Sydney and Brisbane every month. This interview also featured in my hometown QLD August edition on page 41 which can be seen digitally here http://scenestr.com.au/read/QLD/2018/1107-QLD/scenestr-QLD-1107.html#p=41 The interview was also published in the NSW edition on page 28, SA edition on page 23 and a shorter version in the WA edition on page 27. If you’re into music they’re a great read but they do cover all of the arts including festivals, stand-up comics, fashion, theatre and film. I feel very fortunate to get to write for them.

2 thoughts on “INTERVIEW WITH STARS, DIRECTORS AND WRITERS OF ‘THE BREAKER UPPERERS’ MADELEINE SAMI AND JACKIE VAN BEEK AVAILABLE ON SCENESTR”