The Brisbane International Film Festival‘s triumphant return in 2017 included many features long missed. There was a Baltic spotlight, short films, world premieres, a showcase of Masters, opening and closing night film (The Square and The Go-Betweens: Right Here which I was lucky enough to see at the Byron Bay Film Festival and placed in my Top 5 Films of last year) and a retrospective on Russian director Andrey Zvyagintsev which included Return, The Banishment, Elena and Leviathan with at its centrepiece  his latest film Loveless. Buying tickets we wanted to cast a wide net and I also wanted Karen to get some picks in plus schedule around our jobs. We missed The Baltic Spotlight also in the running was Ali’s Wedding, Loving Vincent (Karen has since seen it), Maudie and Loveless (alas two Canadian films too including one directed by Bruce McDonald who did The Love Crimes of Gillian Guess from BIFF 2005), Last Men in Aleppo and Returnee from Kazakhstan (just the type of obscure foreign film that can transport you to another place on Earth at street level so to speak), Aussie flick Watch the Sunset and Karen was keen on My Year with Helen. Saw none of them but I was very grateful to be back at BIFF seeing multiple films. It perhaps should be noted that beyond the focus of a film festival most of these films missed I have not gotten around to seeing which I think there is something in that. A film festival really elevates and spotlights interesting movies.

The Leviathan: Screening Sunday 20AUG2018 at 10:30am in Palace Centro Cinema 7 was this movie which I proudly chose and bought tickets to see on the big screen. But alas while going to opening night on Thursday, seeing a Chekov play Uncle Vanya for Scenestr on Friday night after work and heading along to my first Impromafia show Lord of the Thrones on Saturday night for Scenestr and writing the reviews I noted we were running late Sunday morning and decided to give it a miss. All my old BIFF traditions were in full force. I’ve heard it’s great and will be interested to hear if any of my fellow bloggers have seen it and what they think.

THE PARTY: This was one of Karen’s choices (although it had been on my shortlist) which we went to see late Wednesday night 23AUG2018 at The Palace Barracks Cinema 1 at 8:15pm. It was the ninth anniversary of the first date I went on with Karen. So we had dinner beforehand at Libertine restaurant which included delicious crab sliders, beef san choi bao and delicious cocktails. 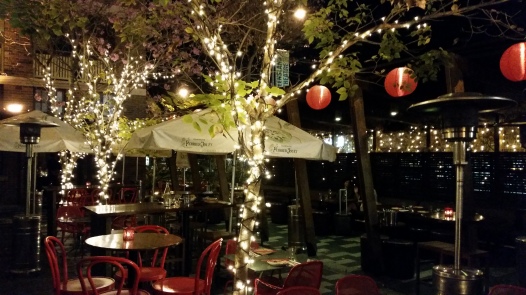 The Party shot in black and white and directed by Sally Potter follows a dinner party of well to do privileged members of class celebrating the hostess Janet (Kristin Scott Thomas) having ascended into the parliament ministry. Of course as the guests arrive simmering tensions come to the boil from old friends, partners and unexpected guests. Just describing it gets me all excited about the possibilities but alas I found the characters for the most part unlikeable and the comedy lacking. One of those films where people think they are cleverer and funnier than what they actually are and more is the pity given the extraordinary cast including Patricia Clarkson, Emily Mortimer, Cillian Murphy and Timothy Spall but there you have it. Karen on the other hand loved it so they’ve got that going for them.

FUN MOM DINNER: Now to another of Karen’s choices in the form of a comedy from America starring the amazingly talented Toni Collette in what has to be arguably the worst movie I saw last year and probably one of the worst if not worst films I ever at the Brisbane International Film Festival. It was Friday 25AUG2018 at 6pm Palace Centro Cinema 7.

Okay it’s a film about mums having a night out on the town, a more mature and nuanced attempt at the premise of Bad Moms except well that film was funnier and better. Sorry. I admire the ambition to go deeper in terms of characterisation but the film is trying to have it both way by remaining a broad comedy. Classic example, two Mums don’t like each other so they light up a joint and hilarity and reconciliation ensues. Except it doesn’t. Bridget Everett’s character ran the gamut between being obnoxiously opinionated and bossy (at both the beginning and end – did her character learn nothing during the course of the story) and honest and profound at tother times. The only shining light was Molly Shannon’s take on a older divorcee trying to find her way back to true confidence and happiness. There are good ideas but close to zero good execution. Even in the most lacklustre films I’ve seen at BIFF I”ve been able to defend the ambition and lack of funds of new filmmakers, originality of ideas, the transformative ability of taking me to another culture and landscape. Maybe I’m harsher on Fun Mom Dinner because it takes me to California, had the benefit of some money and is totally unoriginal but when I think of the worst film I saw last year this always comes to mind. Bad Mommy, Bad Mommy and not in a fun way.