During the month of January I was fortunate enough to interview Gene Peterson who is the director and percussionists for the circus spectacular 360 All Stars. The show was Gene’s brainchild where he headhunted the best in the world at what they do to assemble in one show. The show has been going strong for six years featuring urban twists on traditional circus arts along with spectacular music, projection and lighting. I spoke to the director ahead of the Adelaide Fringe Festival which for them, like a lot of the artists performing at the Adelaide Fringe kicks off their world tour for this year. Gene is an insanely talented man, at age 14 he had his work Raindance performed by the Darwin Symphony Orchestra, who has just never stopped asking himself how he can self-improve and the stars of his show are very much of a similar discipline and world leaders in their field. Adelaide readers are in for a treat and others should keep their eyes peeled, they’ll be going all around the world. Mr Peterson was kind and enthusiastic about the show and was a pleasure to talk to, you can read our interview here http://scenestr.com.au/arts/360-allstars-the-supercharged-urban-circus-comes-to-adelaide-fringe

Produced by Eyeball Media Enterprises Scenestr. is an online national magazine with local offices around Australia. Celebrating 25 years in 2018 of publishing history they’ve excelled at moving into the digital realm but they remain at heart from the streets. They still publish magazines in print for Perth, Adelaide, Sydney and Brisbane every month.

This interview featured on page 61 of the February South Australia Edition which was the edition with a heavy emphasis on the Adelaide Fringe which you can find here http://scenestr.com.au/read/SA/2018/36-SA-Fringe/scenestr-SA-36-Fringe.html#p=20 Featuring in the same edition was my interview with Contemporary Circus Performer Jascha Boyce from Gravity and Other Myths which was done for the WA Christmas edition as a cover story. Their show A Simple Space had now moved on from Fringe World in Perth and they were continuing their tour at the Adelaide Fringe as was Heath Franklin with his impersonation of Chopper in his stand-up show Bogan Jesus whom I had interviewed for the Western Australia January edition. A cut down version of the Jascha Boyce interview featured on page 64 and the one with Heath Franklin featured on page 66.

A cut down version of the interview with Mr Franklin also featured on page 47 of the Queensland February Edition. 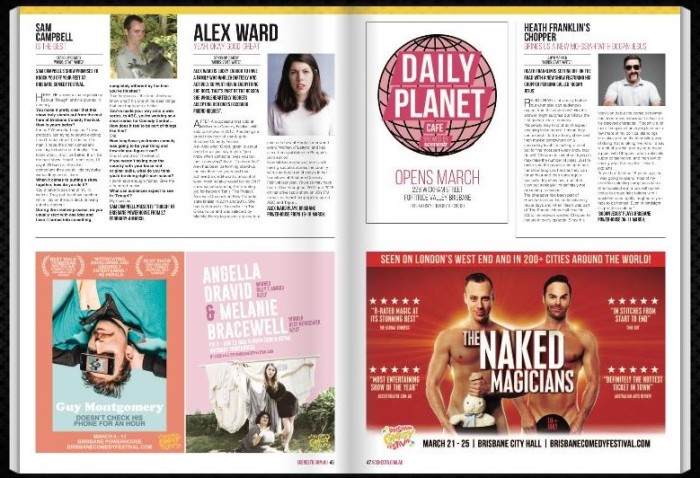 There is also an Arj Barker interview on page 74 but I will discuss that further in the future when it goes online. I was also very happy to see my film review for I, Tonya featured in the February print edition of Scenestr for NSW (page 29), SA (page 21) and WA (page 27) but not my hometown. 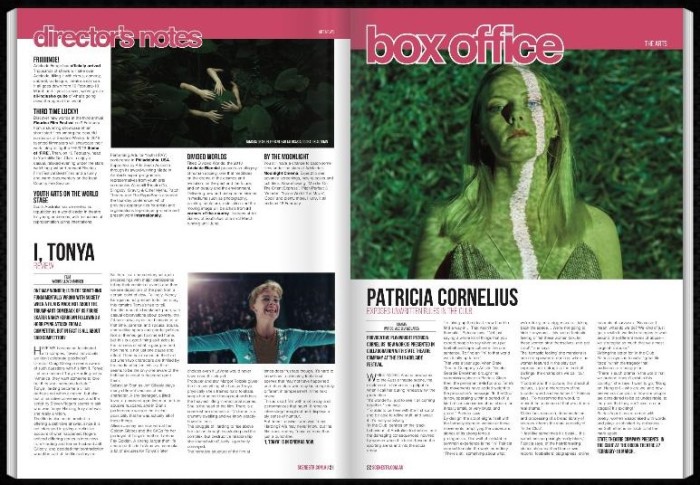 The Queensland editions are the most established, the largest and always jam packed so this makes sense but it was still a thrill to see it in print in the inter-state ones. All in all I had four interviews and one film review feature in the South Australia magazine and something in all four February editions throughout the country.

Forgive my hubris, I doubt this kind of luck will be repeated again any time soon so I wanted to take stock of it as getting published in print is a bit of a thrill for a GenX guy like myself. Digital versions of each print magazine can be found at the link here http://scenestr.com.au/scenestr-magazine/scenestr-digital-edition-2018 A digital version of the print edition can be found here http://scenestr.com.au/read/WA/2018/10-WA/scenestr-WA-10.html#p=27 with the interview on page 26.  If you’re into music Scenestr are a great read but they do cover all of the arts including festivals, stand-up comics, fashion, theatre and film. I feel very fortunate to get to write for them.