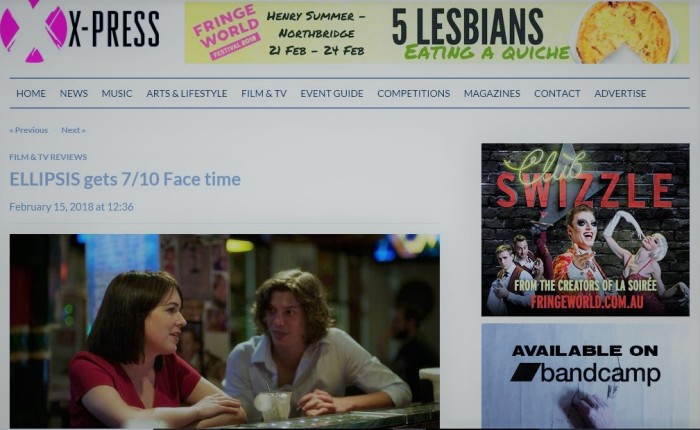 The second of three posts of mine with three different publications that were published online today was a film review of the new Australian movie Ellipsis. It is the first time I was sent a screener of a movie to do a review for a publication which I can’t lie was a little thrill for me. Thank you very much to X-Press Magazine for giving me the gig. I don’t do this for a living and I am but one of many who can and would like to do this anywhere anyhow. So I kind of don’t know what it all is leading to or how best to navigate to an even more interesting future. I’m sure it gets old reading that I feel lucky or grateful or fortunate but the truth is… is that I do and I should and I will. You are trying to build up your reputation though and get more opportunities and so moments like this are nice.

The film is directed by David Wenham whom international audiences may know for his Faramir in the Lord of the Rings sequels and Australians will know for his whole raft of incredible work in a variety of projects. At 51 he has directed his first feature film, an experiment of sorts after another project fell through and he made a bet with a mate. Shot in a handful of days on location it is bolstered by two likeable leads, a veteran character actor and some colourful Sydney personalities who feature. I think you’ll find the look and sound of the film pretty damn enjoyable too. You can read my review here http://xpressmag.com.au/ellipsis-gets-7-10-face-time/

X-Press Magazine was established in 1985 and at one point was Australia’s highest circulating free weekly entertainment publication with over 40,000 copies reaching 1,000 outlets every week.  On the 24th May, 2016 Issue 1527 hit stands. Like many publications of its ilk X-Press Magazine is now foremost an online magazine engaged globally and making the most of the possibilities that new digital technology offers. It’s roots though are tied to its home city, love of local artists and productions and music which it supports wholeheartedly. Perth a capital city most isolated from all the other capitals is continuing to grow and develop culturally and artistically with its own identity and talent. X-Press has always been there to capture this growth and will continue to do so.