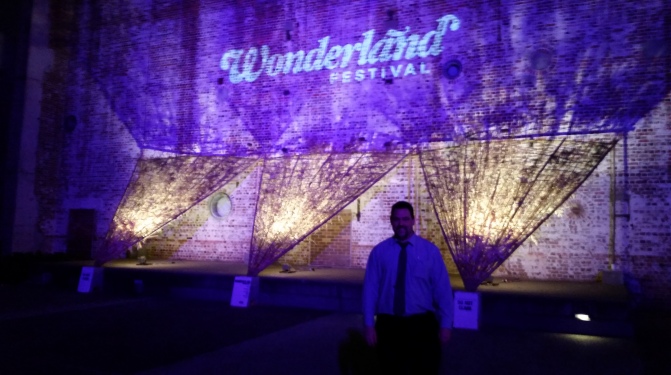 The second and final weekend of the Wonderland Festival was a rollercoaster ride of up and downs. Having seen Love/Hate Actually on Thursday night I set off to attend a concert by stand-up comedian Alex Williamson at the Old Museum before returning to Wonderland for the rest of the weekend.

I love going to see stand-ups, in fact a lot of the shows I saw at Wonderland were comedies or comedian shows. The Old Museum in Brisbane is not far from where I used to work as hospital wardsman many years ago. I’ve been there over the years when they had the French Festival there, to see my sister in law perform as a member of Queensland Wind and Brass, it is the home of the Queensland Symphony Orchestra. There were no elderly volunteers serving homemade scones with tea this night though. Karen and I approached two young women at the canteen who told us no food was available but would we like a drink. No peanuts, no chips, nothing, nada. They kindly told me where the nearest eating venue was and we ended up getting some nice truffle chips before racing back to the venue.

We found a good spot with twenty minutes to go until the allotted time of 7:30pm. I whispered to Karen that the show would most likely start at 7:45pm. As time went on I began to notice most of the audience was younger than us and Karen did not approve of all the baseball caps being worn indoors. I’ve never really cared for that absurd protocol and enjoyed the lively atmosphere of people kicking back after a hard week at work ready to laugh. A few dared each other to race out and grab another drink having already finished the one they had by 7:35pm. Sure enough the show kicked off at 7:45pm and within a minute Karen had gone stone faced. I leaned in and told her I had to stay to review the show but if she wanted to leave -she could but she didn’t. 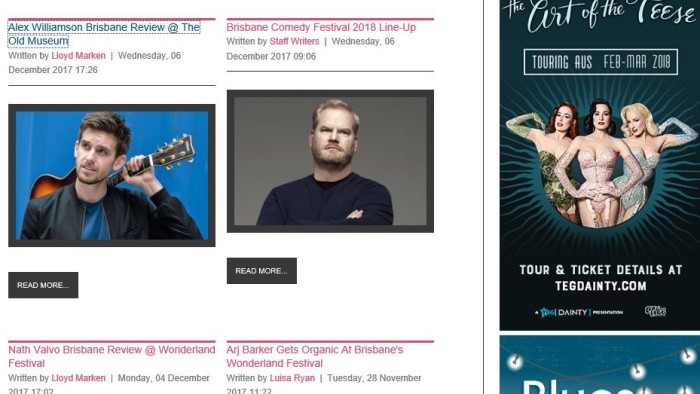 I was faced with a conundrum, this was the first time I had really seen a show for Scenestr and not enjoyed it. I wanted to express that but I also wanted to be fair to the comedian who had allowed us to attend his show to give an honest and fair review. Alex Williamson is extremely popular, engages with his fan base, commands attention on stage and give his all. Most of his comedy for me though lacked depth and rarely made me laugh. You can read more of my thoughts here http://scenestr.com.au/comedy/alex-williamson-brisbane-review-the-old-museum-20171206 I actually believe Williamson is very talented and could mature into a comedian who makes me laugh one day. 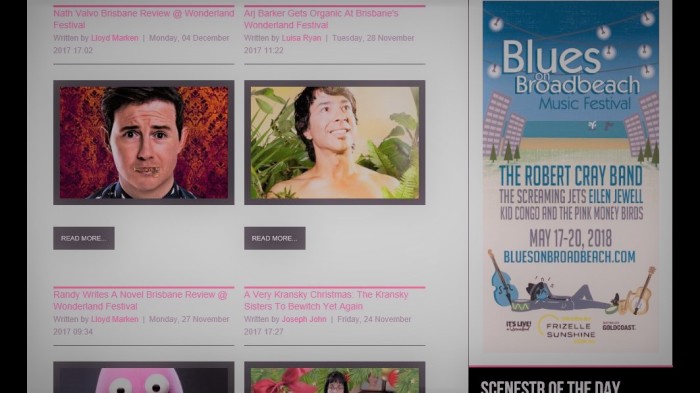 Which brings us to Nath Valvo, a stand-up we saw at Wonderland Festival the next night. Like the puppet Randy the week before I laughed quite a lot through Nath’s routine. Valvo’s audience was full of people of all different ages, backgrounds, etc. We all laughed together in recognition of so many truths that felt familiar to all of us. Of course the key was wit, timing, delivery, pacing not just insight. Comedy is a tricky thing to review, repeat some of the jokes and you’ll spoilt them with your delivery and lack of context, over analyse too much and anything ceases to be funny. Its hard to explain what is funny but you know it because people laugh and if it isn’t funny they don’t. To that end wasn’t Alex Williamson just as funny then. Well not to me and therein lies the rub. Given I saw them one night after the other and had such different reactions it was fascinating to compare the two but in the end that’s just coincidence. I found Nath Valvo really funny and you can read more of my thoughts here http://scenestr.com.au/comedy/nath-valvo-brisbane-review-wonderland-festival-20171204 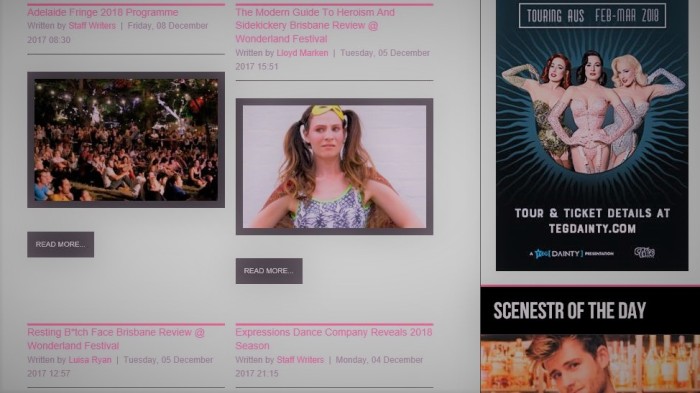 The next day we saw Nath again on a sunday afternoon before going to see the final show I was to attend at Wonderland – A Modern Guide to Heroism and Sidekickery. Conceived and performed by Michelle Zahner with some help from the audience it was a humble intimate piece that poked fun at comic book tropes while delivering a heartfelt message of the little ways we can be heroic in our own lives. I’m curious to see how the show could expand without spoiling what makes it so special. Zahner has such a likeable engaging stage presence that I think no matter what the piece will remain charming and smart. You can read more of my thoughts here http://scenestr.com.au/arts/the-modern-guide-to-heroism-and-sidekickery-brisbane-review-wonderland-festival-20171205

I felt really lucky to attend all the shows I got to see and review and/or review at Wonderland and hope to get more opportunities in the future.

Produced by Eyeball Media Enterprises Scenestr. is an online national magazine with local offices around Australia. With over twenty years of publishing history they’ve excelled at moving into the digital realm but they remain at heart from the streets. They still publish magazines in print for Perth, Adelaide, Sydney and Brisbane every month. If you’re into music they’re a great read but they do cover all of the arts including festivals, stand-up comics, fashion, theatre and film. I feel very fortunate to get to write for them.