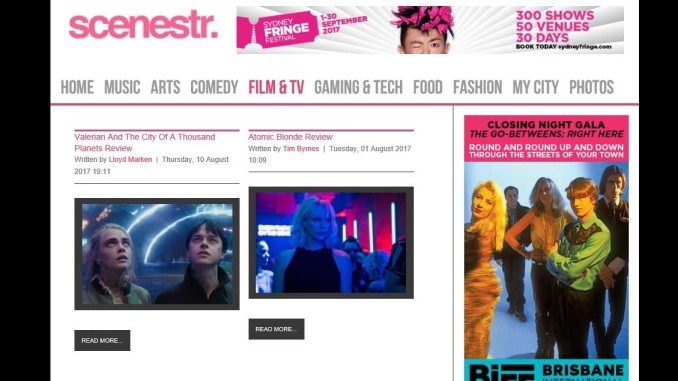 Earlier this week I was fortunate to be sent along to attend a preview screening of the new Luc Beeson movie Valerian and the City of A Thousand Planets at New Farm Cinemas. New Farm is an inner city suburb of my hometown Brisbane but not a place I regularly visit. The nearby Powerhouse is where we saw The Soldier’s Wife performance. I found the independent New Farm Cinemas magical with an assortment of old movie and cinema memorabilia throughout its foyer. Additionally the seats were comfortable and modern. We may have to return soon.

Valerian itself has had a weak debut stateside while tearing up the box office in its home territory of France. Following bad reviews I attended with serious misgivings but hopeful. I was pleasantly surprised, there are many flaws with it but the 3D is the best I’ve seen since Avatar, there was a message to the film and while the humour, characterisation and dialogue was noticeably weaker I had a good time. Perhaps see and judge for yourself, those who only attend the cinema a handful of times a year face a difficult decision. There will be no doubt better films to see but maybe few that make as good a use of the big screen and 3D.

You can read more of my thoughts here http://scenestr.com.au/movies-and-tv/valerian-and-the-city-of-a-thousand-planets-review-20171008

Produced by Eyeball Media Enterprises Scenestr. is an online national magazine with local offices around Australia. With over twenty years of publishing history they’ve excelled at moving into the digital realm but they remain at heart from the streets. They also publish Scene magazine in print every month focussed mostly on music gigs, festivals, stand-up comics, fashion and interviews with local and international bands. If you’re into music they’re a great read but they do cover all of the arts.

I consider myself very lucky to have had five film reviews published with them consisting of ones for Hidden Figures, Logan, The Fate of The Furious, 20th Century Women and now Valerian And The City Of A Thousand Planets.