As previously mentioned I did a work elective in my final undergrad year at QUT where I was part of a group of students who wrote the newspaper for the Brisbane Writers Festival in 2004. Until the past couple of years it was one of the proudest moments of my short aspirations of being a writer and it still remains important to me. It may be coincidence but I suspect not that I never really went back to the writers festival in subsequent years until the call went out from Scenestr for interest in reviewing events at this year’s BWF. I consider myself very lucky as a result to have been able to attend the Dinner with Laura Weisberger at Gerard’s Bistro.

I was in attendance by myself and so was pleased when I saw an old friend Karen B arrive. As you maybe aware Karen set me up with my wife Karen. We stood and chatted while delicious entrees were served on trays around us and bubbly was sipped. Karen had a far greater knowledge of not only Weisberger and her work than I did but it turned out the Brisbane Writers Festival was a big deal for her and something she regularly attended much like the Brisbane International Film Festival is important to me.

As we made our way indoors for the main event we were directed to allocated seating but I was lucky enough that my friend was only two people away at the next table. I was not sure of the format and wondered if I was at a press table and was expected to ask questions of the famous author on behalf of my publication. As I sat waiting, the current news anchor for Channel 10 in my home state, Georgina Lewis introduced herself and her friend Elissa to me as they sat down opposite. Another beautiful woman wearing a star necklace and long blonde hair said hello to me by name as if we were old friends. This was Mary Dickinson who amongst other things runs her own blog site and regularly contributes to various publications including Style Magazine. That was enough for me, I dashed over to the gentleman who had directed me to my table and asked if he could confirm the format of the evening. He mentioned what I was most familiar with, there would be an interview followed by questions open to the audience but I would not be called upon as a reviewer to say anything which is what I had been expecting would be the case but had wanted to confirm given the wattage at my table. Perhaps sensing a little nervousness he assured me “Don’t worry you’ll be sitting next to Johnny the owner who is very approachable.”. Terrific. The thing though was that this was quite true. 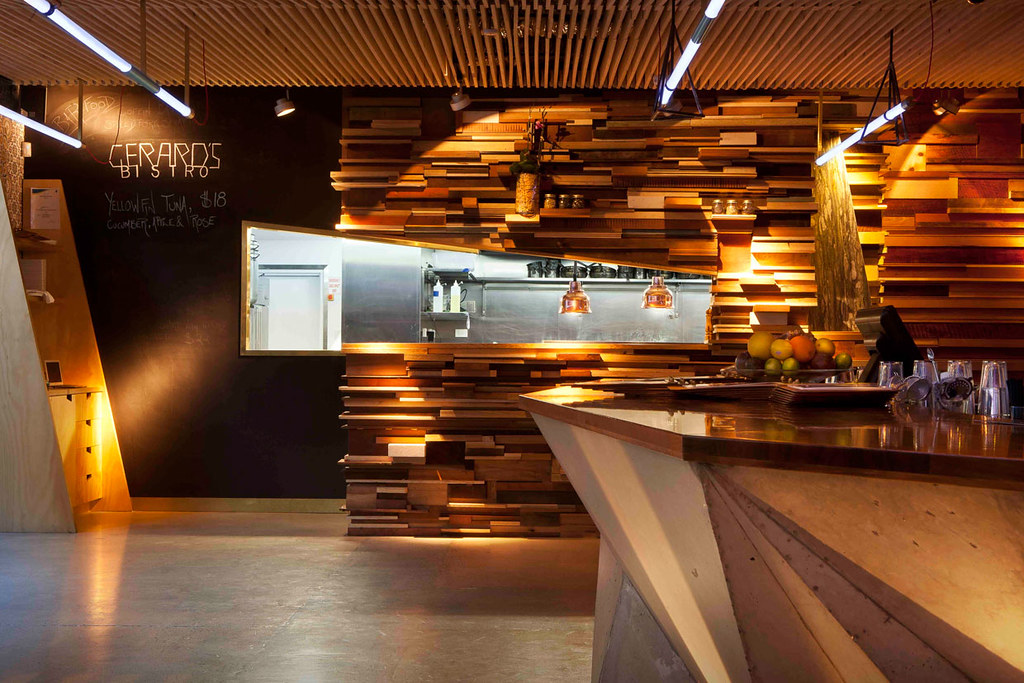 The evening began with Marie-Louise Theile who used to be the Channel 10 news anchor and now runs her own company interviewing Lauren Weisberger in front of the bar while we all listened. Those attending had shelled out $165 a ticket for a three course meal at one of Brisbane’s trendiest restaurants with the author. Weisberger in town to promote her new book When Life Gives You Lululemons did not disappoint. You can read my review here http://scenestr.com.au/arts/dinner-with-lauren-weisberger-review-brisbane-writers-festival-20180907 of the dinner but suffice to say it was fun. I found the décor of the fashionable James Street eatery appropriate to the event with a panelled wall of various wood evocative of books on a shelf and intimate reading areas you find in grand old libraries.

Afterwards I kept my mouth shut I hope for the most part and just quietly listened during dinner and took my notes for future reference when writing the review later. However there were little moments when me and my fellow diners talked a little about ourselves, I remember talking about my marriage and my interview with Ali McGregor. Mostly I listened and talked to Karen at one point but appreciated the generosity and friendliness of my fellow diners who walk in different circles to me but were treating me no differently. I even got an old fashioned out of the mix which hit the spot nicely. The meal was super impressive including possibly the best pork I’ve ever had. I went to buy a copy of Lululemons and get it signed by Lauren who kindly did and posed for a picture. While everybody else was eating she was taking one table of guests at a time and doing this. Karen left and I took my queue to follow, after all as I had a review to write and a day job to get to in the morning. I gave my leave to everyone at the special table I had gotten to sit at and stole off into the night with some pretty cool memories and a brand new book. Lauren Weisberger, the Brisbane Writers Festival and Scenestr have kindly provided me once again with another highlight I am grateful for.

Produced by Eyeball Media Enterprises Scenestr is an online national magazine with local offices around Australia. Celebrating 25 years in 2018 of publishing history they’ve excelled at moving into the digital realm but they remain at heart from the streets. They still publish magazines in print for Western Australia, South Australia, New South Wales, Queensland and now Victoria! every month too.