As you may have noticed due to recent posts I have a bit of a soft spot for film festivals. So I count myself very lucky whenever I have been given an opportunity by Scenestr magazine to interview film festival directors. After speaking with Palace CEO Benjamin Zeccola in the lead up to the cinema chain’s Lavazza Italian Film Festival run throughout Australia last year. I was then lucky enough to speak to the director of the Alliance Francaise French Film Festival earlier this year. Now I have gotten to interview the Festival Director of KOFFIA David Park.

Mr Park works for the Korean Culture Centre which is involved in sharing Korean culture with all Australian through a variety of methods including dance, language  and cooking classes in addition to the film festival. As someone who born in South Korea but came over as a young boy he can see the benefits of such work in the larger community and I enjoyed talking to him about this as well as the joy of seeing cinema from around the world. You can read the interview here http://scenestr.com.au/movies/korean-film-festival-in-australia-showcasing-the-best-of-hallyuwood-20180726 and if you live in Australia check out when the KOFFIA might be in your neck of the woods.

Produced by Eyeball Media Enterprises, Scenestr is an online national magazine with local offices around Australia. Celebrating 25 years in 2018 of publishing history they’ve excelled at moving into the digital realm but they remain at heart from the streets. They still publish magazines in print for Perth, Adelaide, Sydney and Brisbane every month. This interview also featured in the NSW July issue on page 31 with a link to a digital copy of the print version here http://scenestr.com.au/read/NSW/2018/26-NSW/scenestr-NSW-26.html#p=31 and in my hometown QLD July edition on page 47 which can be seen digitally here http://scenestr.com.au/read/QLD/2018/1106-QLD/scenestr-QLD-1106.html#p=47 If you’re into music they’re a great read but they do cover all of the arts including festivals, stand-up comics, fashion, theatre and film. I feel very fortunate to get to write for them. 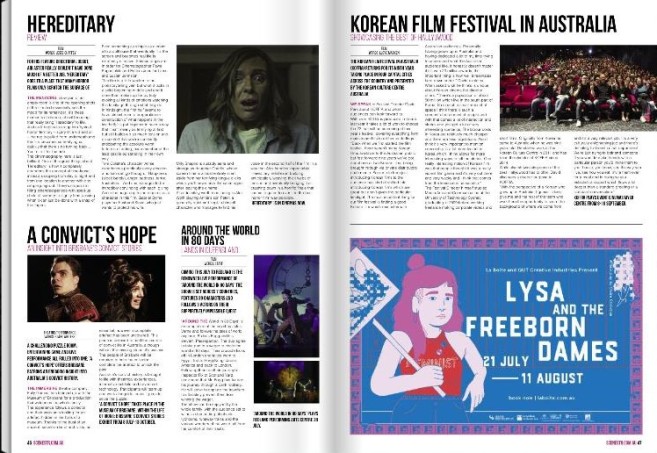