RESCUE DAWN: Thursday night and I went to see Rescue Dawn at Regent Cinema 3 at 7pm. I was not too familiar with the great director Werner Herzog but the idea of a German who became a pilot for the United States Navy and was shot down over Vietnam intrigued me and it starred Christian Bale coming off Batman Begins. It was a fantastic a film, a little low on budget for its flying scenes but right on the money in terms of portraying how harrowing POW camps and the jungle can be. It has a real lived in quality to what is ultimately a remarkable story. What these POWs endured was horrible and Bale is ably supported by Steve Zahn (honestly people need to give him a bigger career) and Jeremy Davies. It was noted that Herzog who made the documentary about the same subject matter Little Dieter Needs To Fly ten years earlier now had a narrative retelling that was more grounded than the documentary such was his nature. Whatever Dieter Dengler was a truly fascinating man and I was glad to watch this film. 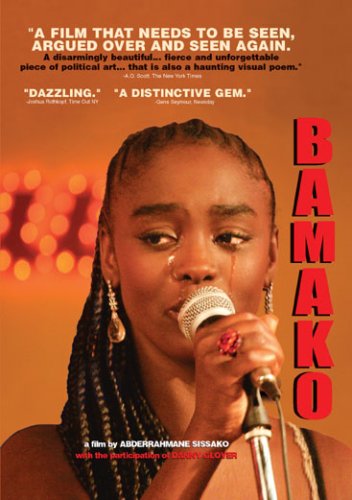 Bamako: Friday and I had to hustle from work to see Bamako at Palace Cinemas at 5:30pm. My first movie from Africa I had seen at BIFF (a co-production between Mali/France/United States) I am sorry to report I was not blown away by it. Telling the story of a court in a small village that puts on trial in a over the top manner the World Bank and the International Monetary Fund. I’m sure there were interesting ideas here about modern corporate colonialism and the continued exploitation of the third world but all I can remember is a fun scene involving Danny Glover of Lethal Weapon fame. Obviously people told this story with noble intent and great passion about things that matter but my only memory is it was not a very good film. Still terrific song.

Squatterpunk: I had some time to travel across to GoMA Cinema B for Squatterpunk at 9pm the same night. Whatever I thought of Squatterpunk it was an experience which we need more in art and film festivals in general. Director Khavn filmed in one day on Mini DV in black and white around the slums of Manilla a group of children. The film was silent and live in Brisbane, Khavn and his band The Brockas performed music alongside the images. There was no dialogue that I could remember and the music was loud and not always easy listening. Truly unique, raw and real. It may not have always held my interest or pleased my senses but it communicated effectively the poverty of some areas of the world and the resilience of some humans to survive in it.

The next day I volunteered my last shift for BIFF from 3pm to 1am at Regent Cinema 1. Regent Cinemas are gone now and so are my days as a BIFF Volly. They don’t even have them anymore. I know Day Watch was a film to see that night but I don’t recall taking it in or any other freebies. Maybe I wanted to just take in the moment. 2007 felt very far away from my experiences in 2004 only a short 3 years earlier. I can’t imagine the melancholy for others when BIFF went away later. I remember a gentleman who looked homeless once coming in and discussing films with someone. I saw David Stratton again and at one point William McInnes the week earlier. He was there for The Night and Unfinished Sky. I caught a glimpse of The Night‘s ending which was moving and Unfinished Sky was made by New Holland Productions who I went to once for a job interview. I did not get the job but I enjoyed the interview and was happy to see those producers enjoying success.  There was also a VIP guest from America there who I can’t remember the finer details about but I think worked on film festivals there.

The next day I came in for the break-up party for the Vollys which was to be held in the Regent bar as in 2004. Pizzas were ordered in and set up around the bar as Vollys worked the last screenings. Promptly VIPs attending the last screening in Regent 1 walked out into the bar and started tucking into the pizza. This is no fault of their own, such things could be expected from a Closing Film but the organisation of it would have been different in the past to avoid it. The scraps of pizza handed to the unpaid Vollys and tireless front of house staff for their thank you party was just one more indication that it was time to leave volunteering behind. I had seen one film Australia (from Brisbane no less!), Canada, China, France, Mali , The Philippines, Romania, Sri Lanka,  3 films from the U.S. and an Australian documentary. I had truly covered a wide spread of films from around the globe. For me the highlights were 4 Months, 3 Weeks and 2 Days and Away From Her but Rescue Dawn, Bella, Waitress and The Search for Weng Weng all made an impression at the time. I hung out with the staff and my fellow Vollys. Being a small part of BIFF’s history is something I’m very grateful for and I have many fond memories. I think the staff who worked BIFF in those days really created something special I am particularly grateful to have met and worked with the fantastic front box office staff. We drank but if we went to Jimmys on the Mall this time we didn’t stay long.

The VIP from Hawaii whom I had spoken to earlier in the Festival was going to Byron Bay the next day. She was easy to talk to and a wonderful person. As everything wound down her and me ended up at the nearby Pancake Manor (an old Church me and my best friends frequented) and we talked some more. She was a little bit older than me and I don’t know if either of us did any obvious flirting but we were there talking at 2am alone. She had curly dark hair and this beautiful purple red dress kind of Grecian in design and what looked like very soft skin. I had been a skinny man who had put on some weight and she cut a very attractive figure. I carry a lot of guilt about the times I did pursue fleeting moments and maybe that is why this time I did not say anything. We had a really nice chat for hours and then I stood dutifully on the side of the road waiting for a cab with her. It could be my own warped imagination but the conversation seemed less easy at this point. There was an air of awkwardness now as if something was being left unsaid. I think when her cab came we hugged and lingered but she got in that cab and I went home. Perhaps it was for the best, very probable she was not interested…or maybe we were just two shy lonely people who had a nice night that could’ve been capped off in a pleasing way. Fortunately this was just the beginning of romance for me at BIFF. At the Brisbane International Film Festival 2008 I met my wife.