“You don’t understand…but what you did was pretty crazy. We were outnumbered. You stopped the fight. You stopped them from taking a soldier.“” Squad leader Erick Gallardo to Staff Sergeant Salvatore Giunta.

Salvatore Giunta was born in the state of Iowa in 1985. At age 17 while working at a Subway store he saw a commercial where Army recruiters were giving away free T-shirts at the local mall. He had always been a sucker for a free T-shirt. He was enlisted in November 2003 serving two tours in Afghanistan. Giunta was Airborne. His unit the 173rd Airborne Brigade Combat Team.

The first deployment from March 2005 to March 2006 left a mark on him. “It’s one thing to see someone dead. But it’s another thing to see an American soldier, or someone you know. They’re at their strongest moments of their life and it is just… gone from them.” he said of an IED attack 21AUG2005 that killed four and seriously wounded another.

On September 1, 2005, Lieutenant [Derek Haines] died in the Baylough area, and that made me really feel my own mortality at 19 or 20. My team leader, Nicholas Post, talked to me. He said, “It is what it is and you just got to try to do everything you can when it’s your time to do it. It might be you tomorrow. It might be me tomorrow. It might be, you know, all of us tomorrow. But that’s tomorrow.” I’ve pretty much taken that with me the rest of my life from the time we had that talk.” Staff Sgt Giunta.

His second deployment from May 2007 to July 2008 was to the Korengal Valley which has seen some of the most fierce fighting of the war.

During Operation Rock Avalanche on 25OCT2007 Giunta’s 1st Platoon was assigned overwatch of 2nd and 3rd Platoon as they went through a valley below. Following sunset 1st Platoon moved to head back to base and within going 100m they were ambushed by an enemy force firing AK-47s, RPGs and PKM machine guns. Sgt Joshua Brennan was walking point followed by SPC Frank Eckrode, squad leader Erick Gallardo, rifle team leader Giunta and Privates First Class Kaleb Casey and PFC Garret Clary. Not far behind them was a HQ Unit.

When the Taliban opened fire Brennan was struck by eight rounds and Eckrode was hit by 4. The wall of fire coming from the enemy halted Gallardo’s attempts to move forward and then he was struck in the head and fell. Giunta ran over to him fearing the worst but fortunately it had struck the squad leader’s helmet. While they found cover Giunta was struck in the front of his vest and a round hit his SMAW slung over his back making them realise they were facing an L-shaped ambush. Giunta ordered Clary and Casey to pull back a few steps to prevent the enemy flanking them. It was now roughly 15 seconds into the engagement when Giunta, Casey, Clary and Gallardo alternated throwing fragmentation grenades to their west while moving north. They reached Eckrode who was wounded and attempting to unjam his weapon having continued to fire since being hit. Gallardo dressed Eckrode’s wounds and called for a MEDEVAC. 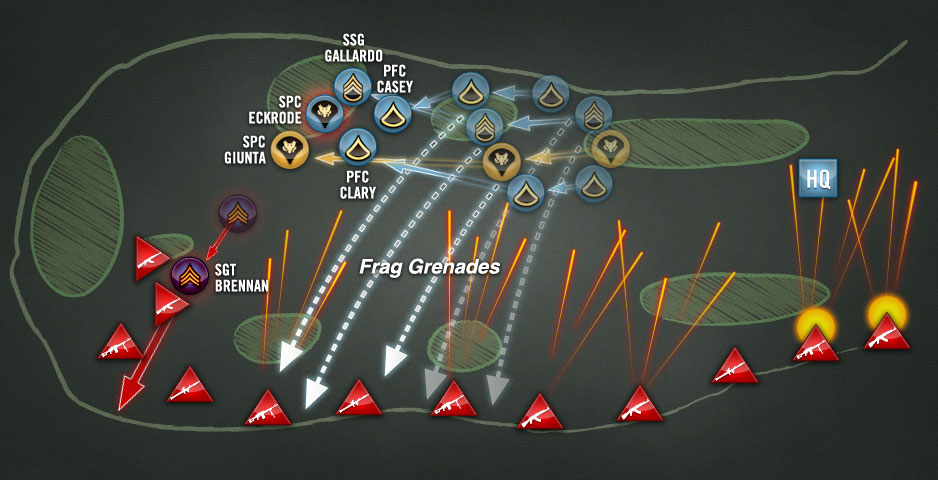 Giunta followed by Clary continued on to look for Brennan. It was then that Giunta saw two Taliban carrying away Sgt Brennan in the distance. Giunta gave chase engaging them with his own weapon. He shot dead one and the other fled. Giunta got to Brennan and pulled him towards the squad and cover and then went to treating him. Brennan was grievously hurt and 1st Platoon’s medic Specialist Hugo Mendoza had been shot in the leg in his femoral artery and had bled to death. While Clary stood guard, Gallardo had come running and he and Giunta found a slight dip where they could protect Brennan. The fighting continued around them as they went to work on Brennan. He was covered with gun shot and shrapnel wounds, with the worst being injuries to his face. He couldn’t breathe. They went through all of their first aid kits cutting apart their own clothing to stop the bleeding. 2nd and 3rd platoon arrived with their medics. Brennan was given a tracheotomy on the spot buying enough time for the medevac chopper and giving them all hope. Brennan was breathing and talking. “Dude, this time you’re really going to go home. You’re going to be drinking beers and telling your stories to the ladies.” Guinta told Brennan and he agreed ” Yeah. Yeah, I will.” Sergeant Joshua Brennan was one of Giunta’s best friends. Later that day he died while in surgery.

“They were better soldiers than me. That’s part of what gets me so much. I was with Brennan for the deployment before and he’s always been a better soldier than me. He was Alpha team leader. I was Bravo team leader. There’s a reason for that. Spc. Mendoza was a combat medic. He did everything we did, plus when we came back dehydrated, “Oh I’m this, oh I’m that, I have this blister Doc,’ he would fix it. He went above and beyond every single day.” Giunta has said of the two men who died that day.

He called his girlfriend Jennifer Lynn Mueller and his mother Rose as soon as he could for the distraction but he couldn’t tell them the details. Both knew from his voice that something terrible had happened and Jennifer had heard basics from another spouse. Even now most of what they have heard come from media reports.

16NOV2010 Specialist Salvatore A. Giunta was awarded at the White House the Congressional Medal of Honour. He was the first living recipient since the Vietnam War following 9 posthumous awards in that time. “It’s bittersweet for us,” said Salvatore’s father Steve Giunta. “We’re very proud of Sal. We can’t mention that enough, but in this event, two other soldiers were killed and that weighs heavy on us. You get very happy and very proud and then you start dealing with the loss as well. You can’t have one without the other.

“I have never gone to war alone,” Guinta has commented. ” I have never been in a fire fight alone and I’ve never felt alone in the Army. There were lots of other guys who did incredible stuff. The only reason I was able to do what I did is because they were doing everything they could do. They make it sound like so much of the bullets were focused on me. No. Bullets don’t discriminate. They were on every single man who was there. And now, you’re going to put a medal around my neck and shake my hand and congratulate me, and everyone’s going to be proud of me’ And I didn’t do anything other than what I was supposed to’ And I know two men who personally gave every single tomorrow they’ll every have.”. In June 2011 Giunta who had been stop lossed previously chose not to re-enlist and left the Army. Having married his girlfriend Jennifer in OCT2009 they had their first child, a daughter, born October 6, 2011. He and his wife moved to Colorado where he is a student at Colorado State University. Eckrode said of Guinta, “For all intents and purposes, with the amount of fire that was going on in the conflict at the time, he shouldn’t be alive.”

They were two of 75 serving members of the 173rd Airborne Brigade who died serving in Afghanistan.