Pulitzer Prize Winning Film Critic Roger Ebert passed away April 4, 2013 aged 70 years old. When I started dating my wife I referred to him as ‘My Buddy Rog’ whose review of Australia would ensure Karen would not refer to him as ‘Her Buddy Rog’. That’s how much his writing meant and make no mistake I do not truly consider him a friend. We never met and I never knew the man. You should leave the word friend for people truly close to you. Yet the expression ‘My Buddy Rog’ reflects something. Roger Ebert was a great writer but he wrote for everyone. He was not a snob who didn’t appreciate blockbusters but he was mercilessly witty when putting down films with poor writing or bad intentions. You really have to discover him for yourself so I will try to keep this short.

I still have it. © Copyright Lloyd Marken 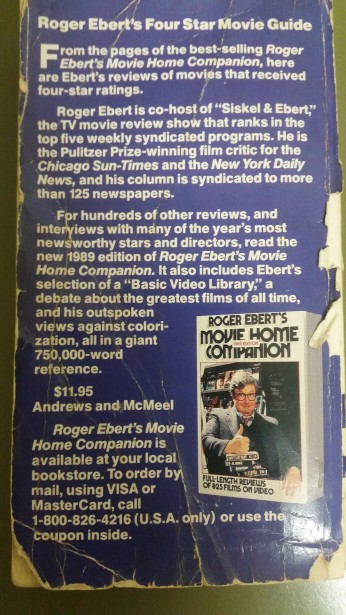 When I was 9, I was handed a copy of his 1989 Four Star Movie Guide and I quickly leafed through to find reviews on movies I knew. I was already aware of the making of movies and was interested in reading films being judged for their components. Star Wars, Superman and Who Framed Roger Rabbit were all dutifully there. As the years went by I came to read other reviews and seek out those films too. There are still many to see but this is how I came to know Roger. Through his words. I did not hear his voice when I read those reviews and having not seen most of the films what I enjoyed about the reviews was his own writing. The review for Claire’s Knee and Lucas were mesmerising. Runaway Train promised amazing visceral stunts. One review related an alcoholic smashing a battle of booze and then trying to soak it up and drink some drops from a towel. This would become more poignant with his own later revelations. I would argue some of his reviews were a work of art themselves and I direct you to his American Graffiti review for an example of why I fell in love with Ebert the writer. Here is but a taste from the master,

“When I went to see George Lucas’s “American Graffiti” that whole world — a world that now seems incomparably distant and innocent — was brought back with a rush of feeling that wasn’t so much nostalgia as culture shock. Remembering my high school generation, I can only wonder at how unprepared we were for the loss of innocence that took place in America with the series of hammer blows beginning with the assassination of President Kennedy.

The great divide was November 22, 1963,and nothing was ever the same again.”

In the mid-1990s my family got a copy of Cinemania ’95 CD and I could suddenly read his reviews of films that he didn’t give 4 stars to. Then the internet came into being and I found his reviews posted on the Chicago Sun Times website with all his current reviews and one’s going back to 1985. I was going to university and studying film and often would look to see how Ebert had judged the works of these auteurs. As an American critic he was a man of his time, Pauline Kael and the like were changing the nature of film criticism as the French New Wave hit in the 1960s with Fellini doing his thing in Italy and then the great American Film Renaissance began with Altman, Coppola, De Palma, Lucas, Mazurky, Peckinpah, Scorcese, Spielberg. Film reviews used to be allocated to a journalist every week to be quickly done up for opening day but this changed as the position of films in pop culture developed and Ebert became the face of this.

In America he is probably best known for Siskel and Ebert where he and Gene Siskel sparred over their opinions of new releases. I never read Siskel’s writings but with the help of YouTube I have been able to newly discover such an indelible part of Ebert’s success. Now I know Ebert’s voice but more importantly how great the two were as a double act. What a pair.

Ebert blogged on his website and some of his writings were part of informing my opinions as a young man. We didn’t always agree but I appreciated how well he considered this world and how much empathy he felt for his fellow humans. You didn’t have to agree with him, he welcomed discussion of the things that were important. When salivary gland cancer robbed him of his voice and transformed his appearance Ebert’s blog became a vital form of communicating to the world without relying on software to give his words a voice. His blog took on a new life those last few years when he refused to go quietly into the light. My favourite piece of his and one of my favourite pieces of writing is the following about his father http://www.rogerebert.com/rogers-journal/my-old-man

Sometimes he poignantly referred to mortality in such late great reviews for Joan Rivers: A Piece of Work and Amour. After his death, My Life was released which is a wonderful documentary that details his life story and showed the deep bond he had with his beautiful wife Chaz.

Karen watched and enjoyed My Life and liked Roger too after viewing his story. I marvel at an interview Ebert had with Howard Stern where he holds himself quite well against the shock jock. That is the man we all lost with his jaw and yet for me those last 8 years he remained as full an entity as he ever had been. It all came back to the words he wrote because they were the most important thing and he still had that. Yet the words stopped too, 3 years ago. I’ve found good critics out there since. I love some of Vulture’s and The A.V. Club’s writers on television series and I enjoy some of my fellow bloggers insights. But there is only one Roger Ebert and I miss having his opinion to read. Still there are films he reviewed I have not yet seen and reviews I have not yet read. That is the legacy of his work. I care to imagine the legacy of him is his family and friends. If that is the case, my buddy Rog gave a lot in this life for us to enjoy.

One thought on “MY BUDDY ROG”