A man wakes up marooned on a desert planet with his chest punctured. He gets up and staggers back to his lab, slow in his pace in pain and fatigued. Wounded and alone in the lab he must administer first aid to himself. There is no one to talk to and no time to think. He must either treat himself or he will die. There is no question in that moment about the futility of his survival and the challenges he will face if he is successful. There is only an immediate and inevitable task to complete to survive. No life flashing before his eyes. No admonishments of a crew that have abandoned him or questioning of his own decisions that put him in such a dire situation.

The whole scene is a microcosm of the film at large which is always first and foremost focussed on the survival of Mark Watney, the astronaut stranded on Mars after an emergency take off, played by Matt Damon. In earlier decades the role may have gone to Harrison Ford or Jimmy Stewart, movie stars that audiences easily relate to as one of them and actors whose greatest strength are underplaying the scene the more extraordinary the circumstances. If one is not a fan of Damon you can move on, I highly recommend for example checking out Mad Max on DVD this week but for the majority of the population this may be the best sci-fi film in years. Speaking of, Matt Damon and Ridley Scott need to buy screen writer Drew Goddard a drink and make it a double because he has made their best film each respectively in over a decade. Matchstick Men was the last time Sir Ridley scored this high and not counting the numerous Matt Damon supporting roles in films and indie hits this is his best blockbuster since The Bourne Supremacy, sorry people The Bourne Ultimatum is just a remake of Supremacy with diminishing returns.

Where Goddard has gone right adapting from an original novel is where so much other recent output has gone wrong. In short the film’s greatest strength is its lack of ambition. No navel gazing here. Mark does not have a family waiting for him at home that he desperately misses, he just wants to live. There are no political allegories about rich and poor, ideologies, immigration, etc. No great questions about what Mars exploration could mean for our society and our place in the universe. At times Watney lies under his Rover in the Red Dirt and we may ponder how extraordinary it would be to live on another planet but while the camera takes in the locations it does not dwell on them. The film looks great but there is a businesslike approach to the shots of orientation not infatuation which coming from such a great visual stylist as Sir Ridley is a surprise but not a disappointment.

Beneath the surface are a few points being made? The reaction of some at NASA to find him alive is to begin a dialogue about how this should be handled in the media but these seem like inevitable conversations that would take place between people who’s priorities are complex.

At first the scenes on Mars are far more interesting. Watney’s plight is dire and daunting and yet the film has a cheeky sense of humour about it. See Damon deadpan about a failed experiment to camera after he blows himself up. As Watney finds a way to communicate with NASA his rescue and the film grow momentum. The people at NASA become warmer and their story more humorous by interacting with Watney. As Watney comes up with an ingenious way to grow potatoes so too do engineers back home have to problem solve a way to rescue him and their numbers grow with more offbeat characters. A sole human stranded and isolated on Mars humanises a group of bureaucrats sitting comfortably back home on Earth via increased contact with him. I don’t think this is unplanned by the filmmakers. 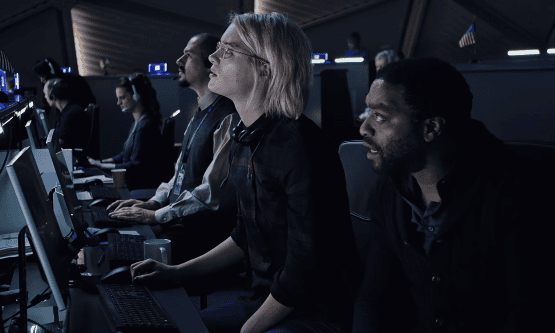 Sound also plays an important part in the film, I can’t guarantee it 100% but I don’t recall any military drums building in the background as people declare they will bring ‘our’ boy home. It is not only Damon underplaying here. Silence is used a lot to reflect the vacuum of space and moments of tension. We are as focussed for example on air escaping through broken visors and alarms sounding as Watney is, sometimes more. The score is non-demonstrative and the music that makes itself far more known is the 70s hits that Watney is forced to listen to for comfort as it is the only music on the planet. That cheeky humour comes through in the song choices here too. As Watney prepares for his rescue ABBA’s Waterloo comes on reflecting both Watney’s attitude towards the plan but also playing against audience expectations

A film about a stranded astronaut rife with 70s tracks demands a track from Bowie to be used and The Martian answers the call better than I could have hoped. The choice of Major Tom would have been welcome if too on the nose. Instead Starman begins right where it needs to in arguably the best moments of the film. The crew who left Watney behind circle around Earth to pick up supplies and sling shot back towards him. This enables the crew to communicate with families hundreds of miles away from them but as close as they have been in months before returning to rescue their stranded crew member. It is a heroic gesture full of sacrifice but the film plays the scene as one of unbridled joy. “Whoever saves one life, saves the world entire.”