There really never has been stunt like Tom Cruise’s dry hump of an Airbus while taking off from the ground and rising to 5,000 feet. It’s a ballsy move with a great payoff. As the subwoofers in the cinema kick in and Cruise’s little legs kick out behind him before the ground drops away in a heartbeat you’re thrilling not just because a movie star is doing this but the way that it is shot because the movie star is doing this. It is worth every penny of insurance money they must have paid. Rightfully so Paramount have made it the lynchpin of their media campaign from Tom Cruise endlessly talking about the stunt in interviews to it being the star of the teaser trailer and the teaser for the teaser trailer. The first poster featured the stunt with no interest in plot or co-stars. Yet even ballsier than doing the stunt itself is putting it in the first five minutes of the film where its link to the rest of the plot is minor at best. The message is implicit “You ain’t seen nothing yet folks.” And you haven’t. While it might remain the most spectacular stunt of the film there are three major set pieces to come with my personal favourite being the assassination plot at the Austrian Opera House. Beautifully choreographed to set up the space for the audience we see Hunt dangle above the stage of the opera Turandot in a dangerous tousle with a much larger opponent running out of time and options to stop a two pronged attack on a political leader. The beautiful aria Neesum Dorma is used to both ominous effect here as we near the climax of the piece and later as a poignant background music around the central connection between the two lead characters of Ethan Hunt and Isla Faust.

I suppose I should explain the plot but at this point these films survive on mood, performances and yes set pieces. Caring about Ethan Hunt seems almost inconsequential next to whether the car chase through Casablanca was shot well. Maybe because Ethan Hunt is really Tom Cruise and whether you like Mission Impossible depends on whether you like the Cruise persona. For my money only Simon Pegg shows up playing a character with heart and personality. I suspect this is why he gets the lion share of the support work. The rest are stand ins for roles. Ving Rhames the old friend who is loyal to the end. Jeremy Renner the stressed bureaucrat working the angles for his friends from the inside. How six years can make a difference? There was a time perhaps when Cruise would’ve been getting pushed into this role and Renner would be the star of the film especially given their age difference but I guess then The Bourne Legacy happened. Alec Baldwin earns his paycheque with a speech about Hunt that is either wonderfully tongue in cheek or stupendously over the top delivered straight and with gravitas in the way only Baldwin can. The villain appears fleetingly making the audience share the elusiveness Hunt feels for his prey. Right until the end the film lays breadcrumbs that Ethan Hunt the physically adept hero who has always beaten his opponents maybe outsmarted here.

I guess I still haven’t mentioned the plot. Before I do that may I just say that a Star is Born! Rebecca Ferguson plays the aforementioned female lead of the film, Ilsa a spy whose loyalties remain in question throughout the story. The camera lovingly lingers on her long lean legs coming out of an immaculately constructed ball gown but also frames her face capturing a thousand words unspoken in her meaningful but mysterious gaze. The script makes her the equal of Hunt in several showdowns and Ferguson herself sells her fight scenes and engages in two stunts with Cruise that back this up. It seems more than coincidence that all the middle aged male stars of previous entries could make it back but Maggie Q and Paula Patton were unavailable and it is disappointing but neither of those actresses ever made as big an impact in their roles as Rebecca Ferguson does here. God help me if they don’t bring her back in the sequel, hell she can even have her own spin off if she can bring herself to do another one with all the great offers she should get because Goddamnit ladies and a gentleman a star is born!!!

Beyond being Hunt’s equal, there is an elegantly understated romance at the heart of the film. Hunt can’t trust Isla for most of the film and previous entries in the film have seen Ethan turn his back on romance for the greater good. Isla suggests to Hunt later in the film when the stakes are getting high that they can run away together. They’ve paid their dues and there will always be another mission. This may be his last chance at happiness. The film may not go into depth about this but an exchange of looks between them later speaks a thousand words. They make their choices. 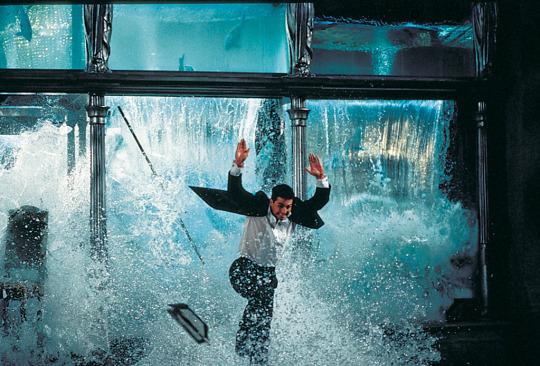 There’s something incredible meta about what each Mission Impossible film has been and where it has landed in Tom Cruise’s career, the first back in 1996 was Cruise’s first stab at a franchise and being an action hero, Jon Voight got the drop on him in a fight scene and at the dawn of CGI in blockbusters the finale involving the Channel Bullet Train heavily relied upon such effects but it also showed Cruise doing real stunts in some of the best sequences. 19 years later and Cruise’s biggest movies are his action movies at a time when maybe he should be slowing down and acknowledging his age. When the character Ethan Hunt is left to ponder how long can he keep up this line of work and keep serving his government loyally when they fail to reciprocate that loyalty there’s another layer to it. As are the jokes about Hunt’s capabilities but also limits. Whatever ego Cruise shows in real life, as producer and star he wisely pokes fun at the supposed invincibility of his hero.

I never did get to the plot but not to fret. Mission Impossible 5 is mostly style over substance, well cast, excellent set pieces and exotic locales. What little character motivations there are shown is mostly in furtive glances but what glances. Hell do a whole super cut of Rebecca Ferguson looking down the lens of the camera and I’ll watch it. Did I mention a star is born?! The first entry is still the best film of the lot, however both my frustrations with this entry and my love of it give rise to the same feeling and that feeling is…I am quite looking forward to Mission Impossible 6. Well done Mr Hunt. Mission Complete.