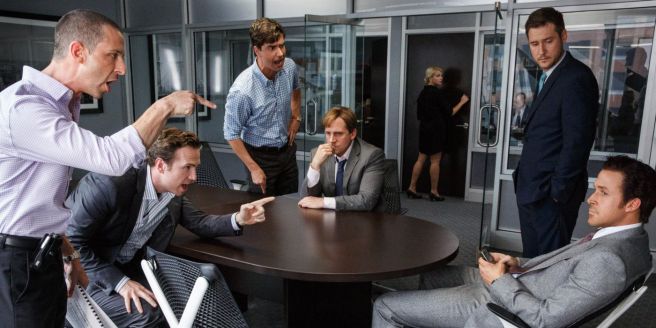 The Big Short is a comedy to be sure but like most great comedies there is a lot of anger underneath the joke it is telling. Because The Big Short is about how people get screwed over by money. Lots and lots of money, people with money, people chasing money, people valuing money too much, people taking money, people spending money and people wasting money. Don’t kid yourself money may not buy you happiness but it sure makes the world go round and we are all on the treadmill making it spin as much as anybody. The makers of this film know this simple truth. Most people just want to go to work, pay their bills, raise their families and pay off a house that will be downsized to fund a retirement. They care about the state of their world and they don’t like being ripped off but if they’ve got a job right now the global financial crisis can become a distant memory.

The Big Short wants you to remember and begins its story in 2005 before the Global Financial Crisis hit. Dr Michael Burry played by Christian Bale manages a hedge fund and notices that a majority of subprime mortgages are not receiving payments and in the second quarter of 2007 they will reach a breaking point so he bets against the market going to get deals from the big banks for pay outs if what he predicts comes true. The big banks, predicting the market will continue as is, take that bet. As the story progresses certain other individuals learn of Burry’s prediction and investigate further. These include Ryan Gosling as Jarred Vennett who works for one of the big banks but believes in Burry’s theory but needs a buy in from another group who ends up being Mark Baum’s specialist team who work with some independence at hedge fund FrontPoint Capital. The fourth group we follow are two young up and coming traders in Charlie Geller (John Magaro) and Jamie Shipley (Finn Wittrock) who see Burry’s forecast has merit too but lack the contacts to profit off it unless they get help from a former neighbour and retired banker Ben Rickert (Brad Pitt).

Most of the names in the film (based off Michael Lewis’s film) are not the actual names of the people involved and there is a lot of breaking the fourth wall to even cheekily explain if something really happened or didn’t to the point where you might still be unsure? Mostly narrated by Gosling’s Jarred Vennett the fourth wall at times seems like it may never be re-established as he pulls the audience in like an accomplice about  the American banking section, how the GFC started, how Wall Street uses big words, how he is a pretty cool guy (obviously he’s Ryan Gosling). On top of the fact that the movie stars three hunks, given the dryness of the topic there are scenes where celebrities talk directly to the audience tongue in cheek to explain basic financial terms that inform what happened. Some are so quickly cut together you may want to get a Lewis’s book afterwards just to make sure you got it right. When Margot Robbie informs the audience that subprime mortgages are just another term for ultra-risky mortgages and that financiers use these terms to confuse you it draws a fine line between condescension and inclusivity.

This is the film’s greatest conceit; it’s inversion of what happened. The majority of Americans got ripped off and screwed over by the Global Financial Crisis! Then it spread to the rest of the world too! The Big Short doesn’t follow suckers or losers though, it follows winners, people smart and brave enough to see what was going down and the film makes us feel included in their wisdom and plight when we weren’t. I don’t say this cynically, I think this is the best movie ever made about the Global Financial Crisis and it will reach the broadest audience and make them feel the most about it as a result of this approach. The film is never preachy but there are few lines sprinkled throughout that hit home not just about the financial sector but maybe even our society at large. There are montages of photos to remind us of current events and major pop culture distractions at the time. One great sequence shows many characters leaving a hotel and their current wealth defined by the car they leave in. There are neat explanations of what is going on using Jenga blocks and revised figures on a white board.

What is interesting is as the GFC looms we start to worry if our heroes will succeed against a system that is so good at protecting itself. Burry’s clients baulk at paying increasing fees on the short bonds without any hint of the market failing in sight while the young Geller and Shipley are turned away at every point. Bale is often acting for the most part by himself playing a man who in many ways is introverted and single minded, he does a lot with very little.

The heart of the film though belongs to Steve Carell as Baum who leads his team to investigate Burry’s predictions before throwing in their money. Here we get a sense of real people who will be affected by the fall in Florida and also the smug financiers meeting for a conference in Las Vegas who don’t care. Carell who put on weight for the role is a bundle of simmering anger throughout the film at one point he even says he wants Vennett to be right about Burry because he wants these people to pay even though he is technically one of them. If all you’ve ever seen is Carell play nice guys or idiots you’re in for a treat in a much more understated performance than his one in Foxcatcher. In the end his sad acknowledgement that nothing will change about the system is a far better request for it to then a direct call to arms. After all there is some acknowledgement that whether these men win they take no pleasure in the downfall of the American economy or that worker bees in the financial market lost their jobs too. Women are noticeably sidelined in this story, (two men are married and we don’t see their wives) but the trades were done by these men and beyond two important character scenes with Baum’s wife (Marisa Tomei) the story is focussed on their work spaces not their domestic ones. That being said the cast is full of fantastic actors on the rise in all the speaking roles from Baum’s team to mortgage brokers to rating agents.

Director Adam McKay has directed some of the best Will Ferrell comedies of the past decade including The Other Guys which touched upon this subject with its villains reflecting already a strong interest in the subject matter from the filmmaker. With this film he steps away from broad comedies and proves there are other types of films he can make. Which is not to say The Big Short isn’t funny-it’s hilarious! I mean you have to laugh about this stuff because otherwise…