LATE AUGUST, EARLY SEPTEMBER: Saturday the 2nd of August 2008 and I went to see Late August, Early September at 2:30pm in Palace Centro 1. This was part of a 4 film retrospective on the early works of French director Olivier Assayas including Paris Awakens (1991), Irma Vep (1996), Late August, Early September (1999) and Sentimental Desires (2000). Also screening at BIFF that year was Boarding Gate from Assayas. While sitting down waiting for the film to start I noticed the girl from UQ with blonde hair whom I volunteered with at BIFF 2004. I was surprised and quite happy to see her but did not go over to her. The film started. One of the weirdest things for me in doing these retrospectives is realising how much I have forgotten about movies. Movies have always been my passion and I could effortlessly retain details about them as I struggled to remember things for school tests. It was a running joke with family and friends. Part of getting old is forgetting things you once knew and it has thrown me to realise that I have forgotten an awful lot about movies. Reading from the program I see the film is about a writer weighing up his career options and a group of friends in their late 20s over a year where one is terminally ill. It seems a slice of life film about the transition from youth to middle age and the tug of making money or being an artist. Being French it is also about sex and relationships. One thing I do remember is Virginie Ledoyen as the girlfriend of the writer having her own secrets. I recall being satisfied with the film, thinking maybe it meandered but it was interesting enough and even then felt a little nostalgic (1999 was a great year). But honestly I don’t remember much.

After the film I had to walk past the girl from UQ and I said hello and she said hello much to my relief. I struck up a conversation and we hung out throughout the afternoon. She was an incredibly kind and intelligent woman. She once described the film Raise the Red Lantern to me in such a beautiful way that I’ve always wanted to see the film ever since. She was doing a thesis on Asian cinema and spoke so well of China and filmmaking. She had a great way of looking at things and I really enjoyed our chats. She also had a gentle manner about her that I found very endearing. We did catch up again but I’m afraid we never really pursued it much further and part of that was I started a new relationship following BIFF 2008 and time just got away. I’m sure she’s doing well and kicking ass and do miss her. I of course had a crush on her a bit and fate had handed me two opportunities to hang out with her which I sadly squandered. It goes like that sometime. 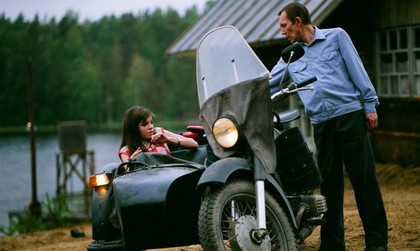 CARGO 200: I was attracted to see Cargo 200 in the sense that it was a Russian film looking back at the dying days of Soviet era in 1984. I think I knew it would be dark and satirical but I really didn’t know what I left myself in for when I attended Palace Centro 2 at 8:50pm Saturday night after walking back from New Farm. Following on from Hunger and 4 Months, 3 Weeks and 2 Days last year, Cargo 200 was one of the roughest films I saw. Unlike those two, the horrible things depicted going on here were done with an intended heightened sense of reality. It involves a girl, daughter of a Communist Party leader being kidnapped and kept hostage by a police officer because well he’s just a sick fucker. No I don’t have a problem remembering this film. Well shot with specific choices throughout it’s obvious director Alexei Balabanov is good at what he does. There’s a lot of things that haunt, the girl’s empty threats about her father being a powerful man as we see his ignorance and ineptitude at her kidnapping. We’re desperate to see her rescued as the film centres more and more on the horrible police officer Captain Zhurov played expertly by Alexsey Poluyan an impotent mostly mute man who lives with his mother and tortures the girl (Agniya Kuznetsova)with almost casual cruelty. Alas Balabanov doesn’t deal in easy answers and happy endings. A well made film with something to say even if in an over the top mode but hard going and not for everyone. 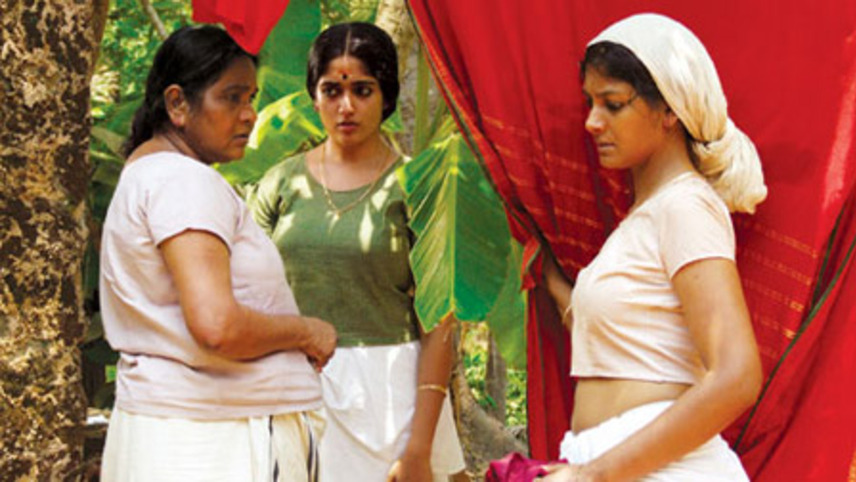 FOUR WOMEN: Sunday August 3 I went to Palace Centro 1 at 6pm to see Four Women from India. Cut from the same cloth as Padam Onnu: Oru Vilapam from BIFF 2005 in the sense that it was about the difficulties women face in Indian culture. Directed by Adoor Gopalakrishnan it told four separate stories about The Prostitute (Padmapriya), The Virgin (Geetu Mohandas), The Housewife (Manju Pillai) and The Spinster (Nandita Das). I found that film fascinating and moving as each woman in her story makes choices as best she can in the face of societal discrimination. Two things stand out from the packed screening which held a Q&A with Adoor Gopalakrishnan.

When Adoor was asked about the symbolism of the location in one scene he replied that’s simply how the location was saying he had not intended anything more than that. This bewildered the interviewer and the crowd for whom such things had resonated. Secondly I recognised a female academic from my workplace at QUT at the screening and hailed from the subcontinent. I asked her later in the week what she thought of the film which I loved. She however told me that she would like to see different types of films being made about that issue or maybe focussing on other issues. It’s always nice to get a different perspective.

THE MAN FROM HONG KONG: Following the Q&A with director Adoor Gopalakrishnan I darted across to Regent Cinema 1 in town to see my next film from the Ozploitation programme at 9pm. I’ve had a lifetime of watching American productions get made here but be set elsewhere. The Australian film industry I grew up with made some spectacular films The Lighthorsemen, Crocodile Dundee and Mad Max but I always wondered what it would be like to make a full action blockbuster in Australia. The closest to the visuals I guess would be Sydney getting shown off in Mission Impossible 2 but that seemed all wrong too. Little did I know the film had already been made and released in 1975. There are a whole bunch of films lost to time before the VHS era and part of the joy of going to a film festival was not only discovering these lost treasures but having them showcased and put up on the big screen. DVDs have helped too but you have to promote the films and get them into the culture again and as streaming takes off I’m seeing again a lot of classic titles just be lost to time.

Anyway the screening for The Man From Hong Kong in that beautiful classic downstairs Regent cinema late on a Sunday night was a film festival event in the best sense. Directed by Brian Trenchard-Smith, the film starred Jimmy Wang Yu as a Hong Kong cop out in Australia to bring down a major villain played by George Lazenby (who I think fared here even better than he did in his James Bond outing). Along for the ride were Rebecca Gilling, a young Sammo Hung, and Roger Ward and Hugh Keays-Bryne (the crowd absolutely erupted when he got put in his place by Wang Yu) both of whom would go on to feature in the original Mad Max. Also Bill Hunter is in there somewhere because Bill Hunter had to feature in every Australian movie ever made. It’s the law. Since it’s the 1970s there’s a lot of racist jokes going around but Wang Yu lets his fists do the talking eventually winning the day. Lazenby who knew martial arts also dives thick into the action and it blew my mind when I saw a series of classic 1970s Australian sports cars present in a full on car chase through Australian country roads that could measure up to anything being done today. There’s also a fight on top of Ayers Rock, (not possible today due to recognition of the sacred value it holds to the Aboriginal people now being recognised as Uluru) and they blew up the floor of high rise in Sydney’s CBD. It’s trashy, dated, over the top and fun as hell. One of the most fun films I saw at any BIFF but it only got better.

Most will know about the classic Australian directors who came of age in the Australian film renaissance, amongst them Gillian Armstrong, Philip Noyce, Peter Weir, Fred Schepsi, Bruce Beresford but I had never heard of Brian Trenchard-Smith who is one of Quentin Tarantino’s favourite directors. Who stepped forward after the film to do a Q&A with Trash Video legend Andrew Leovold. I think I attended with a mate of mine who I worked with at QUT and we had a blast. Trenchard-Smith like his more well known contemporaries has gone on to work overseas too but in films like Leprechaun 3 and 4. He also directed Nicole Kidman in her film debut BMX Bandits.

Here he regaled us of tales from The Man From Hong Kong‘s shoot including one where he set himself on fire to convince Lazenby to do the same for a fight scene. According to IMDB however when Lazenby shot the sequence he struggled to get his jacket off and subsequently received burns to his arm. You can see this in the finished film. Another close call can be seen in the final shot of the trailer where a car explosion saw the door come flying off towards camera barely missing the cameraman. Such stories are covered in the excellent documentary Not Quite Hollywood which screened at BIFF 2008 and covers a lot of the films from the BIFF 2008 Ozploitation program including The Man From Hong Kong. Apparently none of the car chase was filmed with closed roads or permits either. Brian also told us that the hero car a 1974 Chrysler Valiant Charger got smashed up for real and was then sent back to the wreckers and repaired. Then the car was sold and apparently when the buyer saw his rego number in the movie he understandably was taken aback.

The film also features the classic Sky High by Jigsaw. When I was a teenager in the 1990s a group called Newtown did a cover of Sky High which was a favourite of mine. I was surprised and delighted when I heard the original in the film which charted around the world and is a bonafide classic. My goodness this film just has fuckin everything!  It might be hyperbole, all kinds of genre films got made over the years by the Australian film industry, but I think there’s something very special about The Man From Hong Kong. Check it out if you haven’t already. My friend Brian and I took off into the night and had a few drinks at the nearby Treasury casino before heading home to get up for the work next day. It had been a great weekend at BIFF 2008 and there were still lots of films to see. Little did I know the next day would change the course of my life.