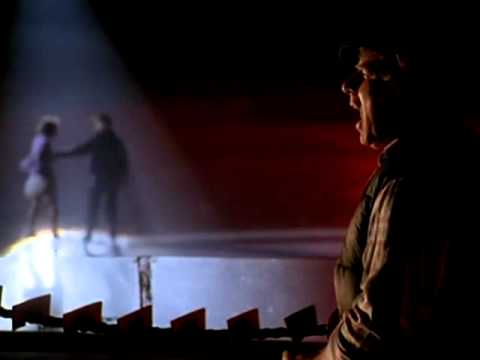 To tell the truth there’s a lot of Memorable Extras in the film Happy Gilmore with throw away visual gags. Try the middle-aged Asian lady (Helena Yea) who hears Happy serenading his long since departed ex-girlfriend over the intercom buzzer and decides I’m having some of that or the poor old lady (Helen Honeywell) who jumps on the bonnet of his car screaming to be broken out of the retirement community Gilmore is dropping his beloved grandmother off at. They’re great moments and great actors but for my money there is just something about the Zamboni Driver. Happy Gilmore (Adam Sandler) rookie golfer has arrived on a date with PR guru Virginia Venit (Julie Bowen). The whole thing is a riff on the classic scene from Rocky. He asks the Zamboni driver if he can have the ice skating rink to himself and the driver (in a reverse from the humble pay off of Balboa’s date) has Happy told “For Happy Gilmore – anything.” It turns out Happy has set up quite a few things with the driver or owner because soon Endless Love is playing and there is a little mood lighting illuminating the rink. After a heart to heart Gilmore then places a bet about scoring a goal to effectively score a goal with Venit. Virginia then scores the goal and with all the power in her court makes a move on Gilmore herself. It’s a nice scene in a frat comedy that I still enjoy. The reason why may be some of the absurd touches throughout, case in point – as we pull back from Sandler and Bowen sharing their first kiss with the cheesy ballad playing in the background we see the middle aged Zamboni driver mouthing the lyrics as if he’s starring in his own music video. Actor John B. Destry nailed this bit not over or underplaying the moment and it left an impact. Whether it was written or Destry came up with it on the spot the head bow and sigh at the end speaks volumes. A whole character’s world contained in a gesture. Funny but also touching.

I’ve tried researching his exploits further but the most I can come up with is his credits over at IMDB. He’s been working steadily since 1989 to the present. He’s played variations of drivers (7 times) and security guards (at least 6 times) quite a bit along with the old venerable beat cop. He’s been cast regularly as a middle aged men in working class night jobs. I’ve watched 3000 Miles to Graceland (2001), Capote (2005) and Watchmen (2009) but can’t recall his Marcus Tittlebaum, Pete Holt or Happy Harry’s Bartender from any of them.

That’s okay because Extras are meant to fade into the parts and not be recognisable like stars but I wonder if at the time he knew that there was something special about the gag he was doing in Happy Gilmore and that it would afford him some recognition. Who knows but he did a great job and may he continue to enjoy a long happy career in the arts.

16 thoughts on “EXTRAS WHO ADD A LITTLE SOMETHING – JOHN B. DESTRY”