Major General John Cantwell (Ret) served in the Australian Army from 1974 to 2012. Rising from the rank of Private to Major General he was on the shortlist to become the Chief of Army following successful command in the Middle East. Instead the PTSD that had long haunted him through two decades took hold and he chose to end his vaunted military career. In the aftermath he wrote Exit Wounds which detailed his war experiences, as a senior commander who had seen combat first hand his openness about PTSD and struggles with it remind all that it is a very real concern and more should be done to help our veterans in our war weary nations.

General Cantwell was born 1956 in Toowoomba, Queensland and was a cadet as a kid. He joined the Army in 1974 and served in the Military Intelligence Corps where he met his wife. Jane hit with a dart at the pub while they were both serving at Kapooka – it was love at first sight. As a Sergeant, humping it on exercise one day he saw a tank coming flying out of nowhere, an Armoured Corps Officer standing straight up in the hatch as he rolled on by – that was love at first sight too. Attending Officer Cadet School at Portsea in 1981 he was commissioned into the Royal Australian Armoured Corps. On exchange with the British Army in 1990 he hoped to get sent to Saudi Arabia for the first major war in a generation. Small Australian Peace Keeping Contingents had been sent to Rhodesia, the Sinai and Namibia but this was the first war since Vietnam and Cantwell got his wish.

He was allocated to an M113 Communications Bradley Armoured Personnel Carrier with two crew members where he would effectively liaise between British and American forces as they moved forward in the 100 hour ground war. Major Cantwell had been waiting and training his whole professional career for such an experience. The Allied Forces were outnumbered 4 to 1 by the Iraqi Army, the fourth largest in the world and the enemy had time to have dug in and fortified their positions. The Allies had air superiority and better equipment even if many had not seen combat and the Iraqi’s had fought the Iranians for over a decade. Decisions had to be made, tough ones but ones that are always made in war. After bombing and shelling, the allies moved forward and bulldozed any remaining Iraqi troops entrenched to negate the use of the enemy’s land mines. They buried them dead or alive. The decency of the man Cantwell never made peace with this even as the tank officer rolled forward and did his job. There was soon a pile up of equipment due to a land mine concern. The Australian Major got out of his Bradley and walked through the dangerous area to map out a course for the congestion to get through all the while knowing he could potentially be blown to pieces. There were other adventures along the way. The Bradley crew often finding themselves alone in the Desert trying to get a picture of what was going on and relay it to fighting forces. Death was a constant and all around. Cantwell still can’t get the image out of his head of an Iraqi hand sticking up through the sand. There were moments of humour though including one where the Officer aimed up on a Scorpion with his pistol before his British Squaddie killed it with a shovel.

Major Cantwell returned home a bonafide war veteran to an Army that had them in short supply. The Gulf War had been a success and the quickness of the 100 hour ground war led to much ignorance as to how dangerous it had been. The bulk of Australian forces committed to the Gulf were Naval, people who knew what he had gone through were on the other side of the world but fortunately there were still some who remembered Vietnam and their own combat fatigue. Life and his career went on and he eventually found himself Commander of the 1st Brigade in Townsville. When a posting for Iraq came up he wondered if a deployment to that part of the world would lay some demons to rest. Brigadier General John Cantwell went to Iraq in 2006 as the Director of Strategic Operations in Headquarters Multi National Forces Iraq. He worked hard in the job and was duly rewarded with several accolades including becoming the first Australian to be promoted in the field to Major General in 60 years. There were other moments though which proved much harder. A shelling of his compound while he was on his phone to his wife in his room. The ground shaking, death possibly near telling your spouse that you love them while they are on the other side of the world would not have been possible decades ago but was something Jane and John went through in modern war. A missile went past him during another attack on the steps of a palace before and he and others moved forward to a market where several had been slain. The smell of the same perfume found at the scene will take him back there years later.

He was also Chief of Operations during the Victorian Bushfires in 2009 where 173 people died and 414 were injured. In 2010 he served as Commander of the Australian Forces in the Middle East Area of Operations (Joint Task Force 633). Regularly going out into the field to meet with troops and see firsthand what was going on. After a mistake had been made in the past with the return of an Australian soldier, Cantwell personally inspected every deceased. His tenure as Commander saw an increase in Australian fatalities in Afghanistan. 41 Australian soldiers have died while serving on Operations in Afghanistan and one in Iraq. In 2002 the first death occurred in Afghanistan, in 2007 there were 3, in 2008 there were 3, in 2009 there were 4. In 2010 Sappers of 2nd Combat Engineer Regiment Jacob Moreland, 21 and Darren Smith, 25 were killed by IEDs in June. Also in June, Privates Scott Palmer 27, Timothy Aplin 38, Benjamin Chuck 27 of 2nd Commando Regiment died when the U.S. Black Hawk they were on crashed during operations. In July, 23 year old Private Nathan Bewes of the 6th Battalion, Royal Australian Regiment was killed by an IED. In August 29 year old Trooper Jason Brown of the SASR was shot during an engagement. Later in August 35 year old Grant Kirby and 21 year old Thomas Dale both Privates of 6RAR were killed by IED. On the 24th of August 2010 Lance Corporal Jared MacKinney of 6RAR was shot and killed during the Battle of Derapet. These were the soldiers who died during General Cantwell’s command of them and he made sure all of their bodies were returned safely to their families. It would be the final straw regarding his PTSD, Cantwell returned home and was awarded the Distinguished Service Cross for his leadership but he sought help and effectively ended his military career. 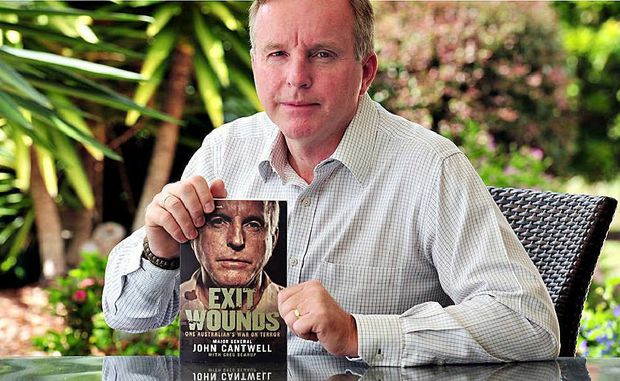 Following retirement in 2012 he has published two books Exit Wounds: One Australia’s War on Terror and Leadership in Action. The following is an extract from Exit Wounds about some of his feelings following Command of JTF633. “The rawness of the new memories sharpens images from the past. The old familiar demons invade my sleep and sometimes my waking hours. I see the hand of a man buried alive in Iraq. The thump and buzz of incoming artillery fire fill my ears. I am seized by the terror of leading soldiers across a dark, empty desert. My fingers feel the weight of a man’s head and I smell the stench of burnt flesh. The dread of death, so close, so immediate, hollows my chest, as it did when I forced shaking legs to walk past half-hidden mines. I am transported back to a Baghdad suburb where a car bomb in a marketplace left a little girl’s pink sandals floating in a pool of blood. I taste bile in my throat at the realisation that I have ordered men down a road that killed them. I feel like I’m losing it.” Exit Wounds is an important and fascinating read of his time in war but also the beginning of his journey of dealing with PTSD. Mr Cantwell remains an advocate for better mental health care for Australian veterans and is Patron or Ambassador of several organisations promoting this.