Jennifer Saunders and Dawn French made the first sketch for AbFab 25 years ago about PR Manager Edina (Jennifer Saunders) and her best mate Magazine Editor Patsy (Joanna Lumley). Running as a BBC TV series for a couple of seasons Saunders bowed out with the show Absolutely Fabulous at the height of its powers in 1996. She then re-worked ideas for another show with the same cast into a revamp in the new millennium. Personal reflections recall that series of specials and telemovies not being nearly as good but time apart (a short series 2011-12 were the last)can make the heart grow fonder. The movie plays like a ramped up greatest hits of the show on a bigger budget with little new added and yet it’s fun to be back with these women in 2016.

Having started out as middle aged women behaving badly in a superficial youth orientated industry there was always something rebellious about the character and socially critical about the show but now with the characters creeping to the end of middle age they have become even more poignant with their fears and hopes. Maybe the fact that they have not grown up and daughter Saffy (Julia Sawalha) is quietly still enduring them with her own daughter now called Lola (Indeyarna Donaldson-Holness) and a new wet blanket of a man should be sad, don’t these people ever grow and learn from their mistakes? Yet they’ve survived, they’ve endured and they haven’t changed because they like how they live and there’s a kind of power in that. Why the hell do they have to conform with any expectations?

Fans of the series will find a lot of familiar beats in the plot, Edie and Pats find out they don’t have any money coming in anymore and Edie looking to land model Kate Moss as a client inadvertently pushes her into the Thames River where its believed she drowns making the two of them pariahs. Barring some fantastic pole dancing in The White Stripes cover of I Just Don’t Know What To Do With Myself

I have never understood the fascination with Kate but she seems to be a big deal in Britain and she’s a good enough sport in this film. In fact she’s only one of several amusing star cameos with Jon Hamm proving once again he’s up for anything. The fact the film comes jam packed with so many cameos is a reflection of the love people have for this show. 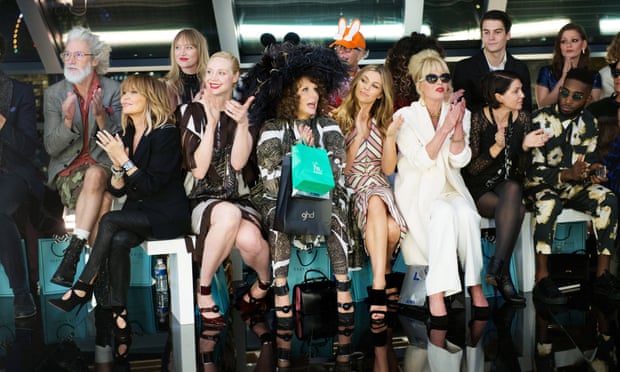 Almost every single gag will be recognised from the series including Patsy getting in drag, Eddie finally breaking down and admitting all her failings and asking for forgiveness, Patsy spewing venom at Saffron about being an inconvenience,  Safi having to overcome a tough crowd by doing something extroverted and against her nature, mocking any new trend in the world of fashion and making fun of any new technological device. This time though it is done on a grand scale culminating with the girls heading out to Cannes in the south of France and featuring a neat little car chase. The originality and bite of the gags when first seen in the 90s may be more predictable here but there’s also a kind of warmth in the familiarity. It’s nice to have the gals back even if for one last glory run. You know it is fun to be in the Riviera, it’s fun to sing karaoke at a gay club, it’s fun to have women misbehaving past 60 and mocking the double standard for men of the same age and it’s fun to be taking the piss out of self-important fashion labels and celebrities. The whole film is just fun if not terribly inspired and with a glass of Tanqueray gin there are worse nights out to be had. If you’re staying in though grab a copy of the original series from the 1990s.