Alien: Convenant has opened to mixed reviews and solid if not exciting box office. Such a reaction may spell the end of Ridley Scott’s plan to close out a new trilogy of Alien films for this decade but will this film grow in prestige with time. Setting out to serve two audiences it may fail to completely satisfy either but there’s no denying there’s good stuff here. Is it enough?

GenXers growing up in the shadow of the first two films were always keen for more go arounds when rumours would arise of James Cameron or Ridley Scott returning to the franchise. At one point long before Avatar took up his time there were even rumours Scott would direct a film written and produced by Cameron but alas that was not to be.

in 2012 though Scott returned to science fiction for the first time since 1982 with Blade Runner to make a Prometheus that would deal with origins of the Aliens and answer finally who was that infamous space jockey. The infamous space jockey turned out to be a giant, bald grey humanoid who took a shot of tequila and made human kind. Or at least one of his ilk did a million years ago. Beyond that we didn’t learn much about them but the ending of Prometheus promised us we would find out in the next film. We don’t.

Prometheus saw the Hollywood debut of Noomi Rapace who did a solid turn as Elizabeth Shaw and before heading off on a new adventure at the end setting up a compulsory sequel. Don’t expect to see much of her in this sequel.

Prometheus sported some incredible visuals but its weak point were fucking moronic characters who played cute with space cobras and took off space helmets for no good reason so they could propel the narrative forward, felt ill and possibly contaminated but still had sex with their girlfriends and in a panic ran in straight lines ahead of rolling giant objects bearing down on them.

Thankfully there were bright spots and not just some neat sexual tension between naked push-ups champ Charlize Theron and handsome Idris Elba. There was Michael Fassbender as peroxided android David. A character you definitely couldn’t trust but was endlessly fascinating whom with a mix of intelligence and naivety engaged me.

I had time for some of the human characters in Prometheus, but I wanted to find out what happened next to David. To this end Alien: Convenant is more of the same. Michael Fassbender returning as David and also starring as Walter a newer model android is easily the most engaging performance/s of the film. Nothing against Katherine Waterston or Danny McBride who acquit themselves well but they’re types and also lambs for the slaughter. Nobody is still wearing a space helmet again but at least the word quarantine comes up in conversation and it just seems like the momentum is always against the human characters here that you understand why mistakes are made even if they are still clearly mistakes.

I guess you want to hear the plot right? Okay people on a ship in cyrosleep going to a planet. Fire on ship, people wake up. Get signal from other planet. Decide to go there because it is habitable and just had people die on fire on ship. Get there and….aliens. Sort of. 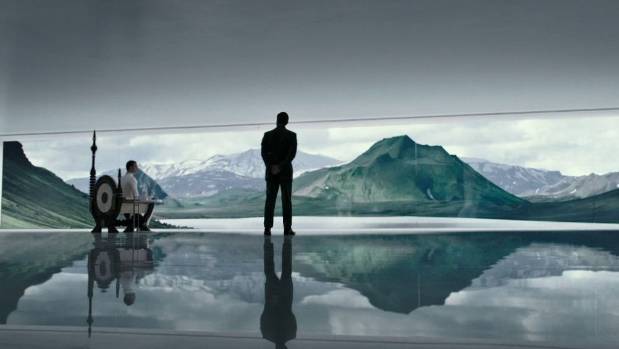 There-done. I can’t state this enough Fassbender and Guy Pearce having a conversation in a white room at the beginning of the film was far more thrilling for me than an Alien tearing down spaceship corridors in the third act. Everything with David and Walter was far more fascinating to me than the alien scares and I suspect the same for Ridley Scott. Despite this though I do think the venerable director has had a red hot go at making the xenomorph scary again and giving us fantastically gross deaths to try and top the chest-bursting scene of the original. Creatures in long grass leaping out at dusk illuminated by nearby burning wreckage. Bursting open backs rather than stomachs. Neomorphs braying quietly an inch from you like a horse. The classic cliché of a shower sex coupling interrupted by other appendages moving in are memorable images as are pathogens moving through ear canals. If there is any complaint it is that it would have been nice to up the creep factor a bit with some of these sequences. Sadly the creatures themselves often move too fast and with little weight obviously rendered by computer their movements are now too sleek compared to the haunting creature in the earlier films. However the scene much touted in the marketing where a belayed Waterston does battle with the classic xenomorph on top of a careening space vehicle while packing a modified Steyr assault rifle is the kind of sequence that couldn’t have been done 20 years ago the same way and makes great use of modern technology.

The film itself is less pretty than Prometheus sporting harsher colours, the planet in this film replaces the bare black volcanic rock with forests and medieval like structures but the sky is darker, the colours even more muted adding up to convey a nightmarish quality of a ruined world. Positively gothic. Which is kind of the point and maybe why this may struggle to find a huge audience. This is a dour film offering no real easy answers. There’s plenty of horror and action in it but its more interested in bigger themes. Yet saying that big themes and moodiness is why this film won’t click with some is just an excuse. Plenty of dour films can still entertain you with their effectiveness. There are interesting ideas in Alien: Convenant, some neat deaths and two compelling performances from Michael Fassbender. I was angry about the idea of having already waited five years for answers when Convenant was only going to leave me hanging for more but I am now intrigued to see where Scott takes this. Yet that does not a satisfying film make and Alien: Convenant is far from satisfying. Wait for it to come out on Disc or streaming. While Alien: Convenant seeks to address some of the criticisms of Prometheus I would argue the latter is still the better film. I’m also putting it out there in this corner of the internet, Sir Ridley I’d like to see Alien 5 with Ripley, Newt and Hicks more than I ever wanted to see this.