Teenagers love horror films and I partook my fair share as a kid. Around about the time a friend dragged me to Hostel I found I’d had my fill and was over the genre. In that time while the gore carried less impact the cruelty of the films and some of the poor writing pointed me in the opposite direction at 23. I was 18 when the original The Blair Witch Project came out. I’d been sitting around camp fires as a Cub Scout for years hearing ghost stories before venturing back through dark woods in the middle of the night with older boys playing pranks and rattling my tent. You stare into shadows long enough and they move. Children tucked up in their beds at night know this and in the shadows anything can be lurking.

The Blair Witch Project knew the power of these truths, despite the genius of its marketing at the dawn of the internet which lead people to believe it was footage of people who had actually gone missing its real power was not in the highly effective marketing but in recognising these truths. By the time the film reached Australian shores we knew the cast were safe and sound but the power of imagination and fear of the unseen still remained the real drawing card of the film. The tale of a witch strung up by townsfolk in the woods 200 hundred years ago pulling her limbs to new deformed lengths is a good ghost story. Another story about children missing in those woods years later or a man being instructed to kill in the 1940s in a cabin that nobody can found out in the forest is another. The premise of The Blair Witch is as strong as that of Freddy or Jason. Another strength of the original was the limitations of then hi-tech video cameras. Night vision and low light can only do so much, point and shoot into the woods and things will come into focus slowly. What are those low grey dots in the haze? The end of branches or two eyes looking at you? Two eyes of a creature that you do not want to meet. Your mind can terrify you more than any gore or jump scare.

Filmmakers Daniel Myrick and Eduardo Sanchez knew this and they made what was at the time a surprisingly effective low budget horror film. Found footage films no doubt had existed before this but this effectively kicked off the modern era and after Australia’s Mad Max had held the world record for budget versus gross for two decades The Blair Witch Project unseated it costing $35,000 for principal shooting and editing and grossing $246 million dollars. A sequel followed the following year but failed to meet the same acclaim and the series slowly languished as time went on until now.

Blair Witch directed by Adam Wingard sets the film years later where the younger brother James (James Allen McCune) of film student Heather Donahue who went missing in the original film’s events is investigating whether she could still be alive. New footage has been unearthed from Burkittsville locals Talia (Valorie Curry) and Lane (Wes Robinson) and he sets off with friends Peter (Brandon Scott), Ashley (Corbin Reid) including film student Lisa Arlington (Callie Hernandez) to hike through the woods to try and find some answers. What could possibly go wrong? 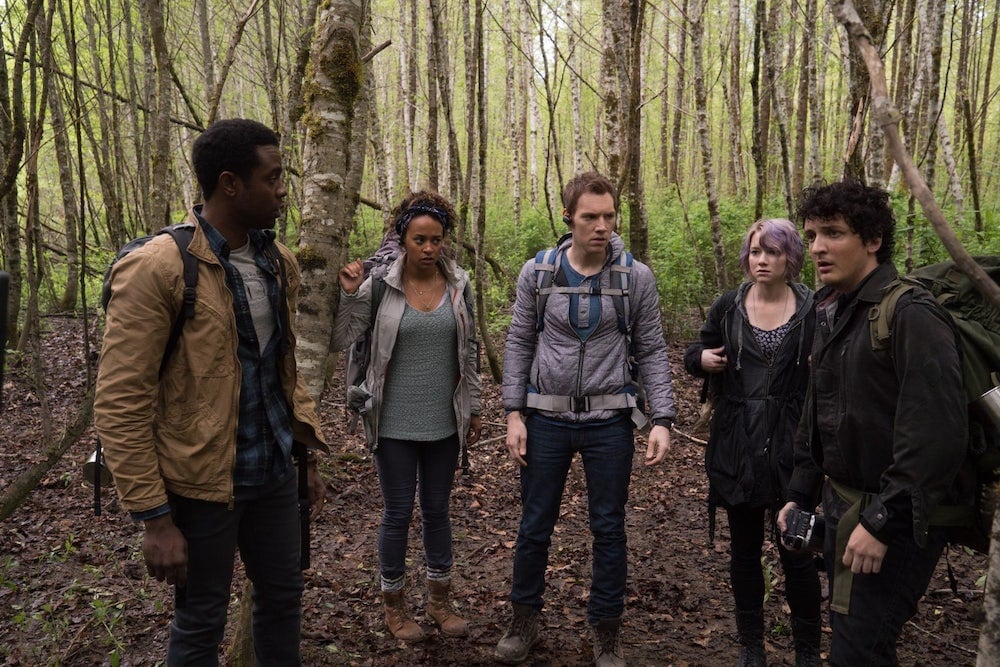 Blair Witch follows the plot of The Blair Witch Project very closely. We are introduced to these people and see them joking around and preparing for a bit of an adventure. They descend into the woods and are disturbed at night by continually escalating weirdness as their group dynamics break down. This slow burn building of dread and plot while also allowing time to get to know the characters is commendable but only if the characters are really likeable and the dread is unpredictable. Those unfamiliar with the original may get a lot out of this bit and interestingly enough as the third act begins small uses of CGI became apparent. While still being shot on digital cameras and remaining low key sequences include giant old oak trees collapsing, tents flying high into the air and shadowy figures lurking in the background scurrying across walls.

While not bringing anything truly original besides some better production values this is a respectable enough attempt at a sequel. The performances are good and there is some variations with the use of new technology like drone cameras and bluetooths. Was I scared? Yes and even more so after the film when I strolled around my house late at night and suddenly noticed the dark shadows in the corners when I turned out some lights.