On Saturday Karen and I set off to drive to Sydney to attend a wedding.

Longtime readers may recall my first real holiday in six years in 2017 was a long weekend drive to Newcastle and back.

We went to Fort Scratchley the only Australian military fort that ever fired its guns in anger.

We also ducked in to Sydney and ate at Darling Harbour.

The drive to Newcastle on Saturday and the drive back to Brisbane from Newcastle was the furtherest I had ever driven in a day.

Now I planned to drive further to Sydney in one day.

I had taken the Friday and Tuesday to give me a buffer of a day to prepare and recover in between the trip and being at work.

We didn’t get away early on Saturday morning but off we we went witht the odometer reading 211,771 kilometres.

I haven’t travelled very much but this would mark the third time I was driving down the east coast of New South Wales.

In 2012 I drove to Port Macquaire to meet coincidentally the bride newly dating the groom for this wedding. A lot of the highway was being worked on at the time and constantly the speed limit was set at 80kms per hour.

In 2017 it was a lot smoother going to Newcastle.

In 2021 there was no question where the first stop would be and sure enough we stopped at Ballina.

In 2017 we parked at the Bunnings car park and made our way across a road with no traffic lights and heavy traffic to grab something to eat from a bakery/cafe. This time we parked in their car park and didn’t have to cross the road.

It was a perfect beautiful temperate sunny day in the morning at Ballina.

We went into the Wicked Delights Bakery, I spotted a bread role and asked what was on it and they mentioned salami and some condiments. It was soooooooooooooo good. I think I had a jam and cream doughnut too or something.

After we had finished eating I waited a while the person there served someone else and told her this was the place to always stop going down the coast.

I had waited to be able to thank her.

Anybody who goes on road trips knows the joy of eating at such places and how their reputations tend to travel.

The best place to grab a feed on the way down the coast. Copyright Lloyd Marken.

Last time in 2017, we stopped for KFC at Coffs Harbour but I didn’t want to hit all the same places again on our second trip.

Except for the Wicked Delights Bakery in Ballina!

We filled up for fuel in in Coffs.

Then ended up on some turn off road around Taree for a bathroom break.

I was keen to drive on and reach our destination as soon as possible. It was getting late.

The weather changed on us.

We drove through rain.

Sometimes cars passed us, sometimes I tore up the passing lane myself on those wet wet roads with the rain so thick that visibility was poor.

It was getting dark but still light as we drove along road cut into mountains around Ku-ring-gai Chase National Park. The indidcation we were about to reach Sydney.

Karen activated google maps as we entered Sydney traffic. One of the wipers had reached the end of its usefulness. It was the one on the driver side. It was still raining and visibility was now at an all time low as I made my way to the hotel but made it we did.

I had been sucked in by the photos on the website, I’d checked other things but I saw that window looking over Sydney Harbour, looked at the price, looked at the room and thought yeah that will do.

It turned out View Hotels – Harbourview was an interesting mix of the sublime and pecuilar.

The rooms were nice even though full length window in the bathroom that would facilitate some kinky acts if you didn’t pull down the draw sheet.

The carpark was underground and looked suitable for shooting a horror film. 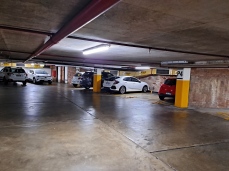 If one of those lights starts flickering I’m bolting. Copyright Lloyd Marken. 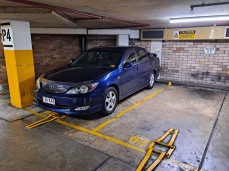 On the other hand after we checked in, we went down to the restraurant in the lobby as we fast approached 9pm and were given a table last minute by the excellent staff. Our meals were delicious, I’m not a big pork belly guy but I loved the one I ate there.

I had checked in with the groom and a third great friend who were staying elsewhere in Sydney.

I looked out over the Harbour.

Tomorrow my friend would get married to the woman he loved and Karen and I would be there.