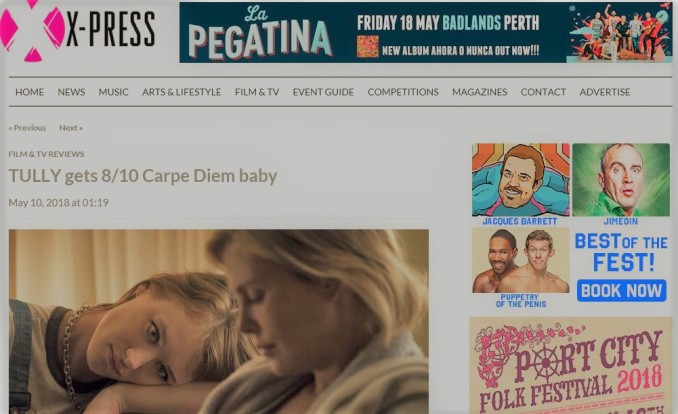 I went to my first preview screening for X-Press Magazine which was another thrill of a milestone for me. It was for the film Tully a few weeks back which reunites star Charlize Theron with director Jason Reitman and writer Diablo Cody. If you’re a fan of their previous collaboration Young Adult you should enjoy this understated gem. Its box office debut in the States was a little soft but I have little doubt this film will find an audience and make bank at some point. Theron is pushing her screen image into new areas here and I think the film is a thoughful meditation on motherhood yes but also about getting older in general. You can read more of my thoughts here http://xpressmag.com.au/tully-gets-8-10-carpe-diem-baby/

X-Press Magazine was established in 1985 and at one point was Australia’s highest circulating free weekly entertainment publication with over 40,000 copies reaching 1,000 outlets every week.  On the 24th May, 2016 Issue 1527 (the last one in print) hit stands. Like many publications of its ilk X-Press Magazine is now foremost an online magazine engaged globally and making the most of the possibilities that new digital technology offers. It’s roots though are tied to its home city, love of local artists and productions and music which it supports wholeheartedly. Perth a capital city most isolated from all the other capitals is continuing to grow and develop culturally and artistically with its own identity and talent. X-Press has always been there to capture this growth and will continue to do so.