Fargo Season 2 is arguably the best television show I’ve seen in the past year and I’ve seen a few. Season 1 set the bar high with fascinating multi-layered characters, stylised scenes of violence, philosophical conversations and themes, a real sense of place and time with well-made production values and a litany of Coen brothers filmography references. At the end of the day though it was the characters and their likeability and their inevitable countdown to confrontation that really suck the viewer in. There was a core four of Martin Freeman as Lester Nygaard a put upon insurance salesman who suddenly gets caught up in murderous activity, Billy Bob Thornton as mysterious hit man Lorne Malvo, 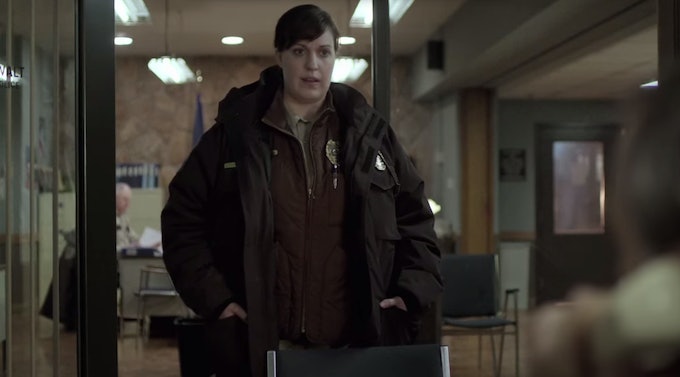 Alison Tolman as Deputy Molly Solverson who has a good heart and strong mind for police work even if her co-workers fail to recognise it and Jim Hanks as Officer Gus Grimly who looks more like his father Tom Hanks every year especially playing an everyman. Wanting to see how it turned out for those four characters was the key to the show’s success even if a lot of its charm came from a large ensemble of colourful supporting characters.

That season was set in 2006 and Season 2 is set in 1979 and works as a standalone work and as a prequel to the former season. For example we know there’s a big event coming in Sioux Falls but we don’t know what or exactly when. We know some people are here in Season 2 but aren’t around in Season 1 but don’t necessarily know their fate here. We also enjoy seeing how some things change but some stay the same. Season 1 is made richer by Season 2 not contradicted by it, that’s what good prequels do.

The number of important characters increases in this season but all are given their fair share to shine. There is a gang war brewing between the local ruling crime family of the Gerhardts headed by matriarch Floyd (Jean Smart) and including her three sons Dodd (Jeffrey Donovan), Bear (Angus Sampson), Rye (Kieran Culkin) and daughter Simone played by Rachel Keller against the Kansas City syndicate.

They are represented by the likes of Brad Garrett as Joe Bulo and Bokeem Woodbine as Mike Milligan. Drawn into this war are State Trooper Lou Solverson (Patrick Wilson) and his father in law Sheriff Hank Larsson (Ted Danson). Like Larry from the first season there are two ‘civilians’ caught up in the plot in the form of beautician Peggy Blumquist (Kirsten Dunst) and her husband butcher Ed (Jesse Plemons) who prove old hands at dealing with this all-out war then the people conditioned to it.

There are a variety of reasons why Season 2 may appeal to me more. First of all the setting of 1979 offers the opportunity to put the story in the time and place of popular culture that I soaked up in childhood. Police cars here for example look like the police cars I first learnt to recognise.

Secondly our two male leads are war veterans which is also a subject that hooks me; regardless of the likely realism of some of their conversations the quiet moments between Lou (who crewed Swift Boats in Vietnam) and Hank (who liberated France as a soldier) are most enjoyable. It’s interesting to note here that Lou as played by Keith Carradine in Season 1 would often say “State Trooper 18 years” as people suspected he’d once been a cop. Here he often repeats Swift Boats and the number of tours as people suspect he’d once served. The more things change the more they stay the same.

Peggy at times is exasperating in how she single handedly destroys the life that she and Ed were building but she is more complicated than that one note, trying constantly to protect and do the right thing by her husband even though he wants a life that terrifies her) and she gets a fantastic action scene a few episodes in. Larry while put upon originally it was revealed very quickly was an absolute asshole and Ed and Peggy are far more likeable than that and no less watchable. The Gerhardts are fascinating with their family dynamics all getting a scene where they have the power but there is a melancholy here of something being lost to time and we perversely hope for them to meet with some success. Martin Donovan (who put on weight for the show) as an alpha male comically undermined later on is well played for laughs by the actor while staying true to the terror his character is feeling.

Their heavy Hanzee Dent, a Native American played by Zahn McClarnon, starts to make a bigger impression on the narrative as the episodes go on but never loses his sense of mystery or menace and that’s very hard to do.

Then there’s the home life of the Solversons where Cristin Milioti as Betsy, Lou’s wife, is fighting cancer and we know at the very least she doesn’t make it to 2006. One scene with her telling a friend what to do after she is gone will bring a tear to your eye. Nick Offerman stars as Karl Weathers the only lawyer in town and a close drinking buddy of Lou’s. His grandiosity is undercut at two critical points and Offerman plays it just right making Karl real and good hearted and brave if still reliably human and fragile.

Bokeem Woodbine as Milligan follows a long line of violent men in film who love to talk putting on airs of class they don’t really deserve. Except well Milligan like them all is a hoot and someone you enjoy listening to, wait until you hear him quote the Jabberwocky.

Out of such a stellar cast of lovable and compelling characters though it might be Ted Danson who steals the show as lovable Hank. Quietly listening to others before offering counsel or incisive questions. Due to his age and seemingly narrative disposability we fear for his safety a great deal.

Brave in showdowns against bigger numbers, if Colin Hanks’ uncertain Officer Grimly is the current example of American male masculinity onscreen then Danson’s Hank was the old model. Nervous to express his emotions too much but easily read by his loved ones. Decent and kind but prepared without hesitation to die with certainty in his convictions and values. Grimly I relate to more but Hank ain’t a bad standard to hold ourselves up to. Every one of these characters whether they lose or win, gets more chance to shine or very little is fully realised and nuanced that even if I don’t agree with their actions I understand where they’re coming from. Except for Hanzee-that motherfucker is just dangerous.

Production wise there is a confidence in this second season with the use of split screens in very inventive ways at the beginning of episodes to catch the audience up with what is happening in the world of several characters, a rollicking soundtrack (I particularly enjoyed Burl Ives’s One Hour Ahead of the Posse, Yamasuki’s Yama Yama and Bobbie Gentry’s Reunion) use of an alien spacecraft (yeah you heard that right), bigger action sequences (although please stop using CGI blood and get back to using old school squibs please) and attention made to recreate a period setting with the action on a grander scale. Cinematographer Dana Gonzales retrofitted an Arri ALEXA camera with vintage Cooke lenses and crew replaced each sodium lamp street light with tungsten light bulbs. These are the things that elevate a production but it would all be for naught without the rich and whip smart dialogue. There’s several, all cast members affect the regional accent and slowly talk each other over to a way of thinking. One example of many is Floyd’s advice to Dodd in an early episode where she establishes control over him to an extent without hurting his ego because she has to. My anticipation for what show runner Noah Hawley and his team will do in Season 3 is now high but whatever transpires Season 2 will remain 10 hours of television to savour long into the future.