In 1944 this was the day allied forces landed in Normandy and began the liberation of Europe.

In 2020 this was the day in Australian capital cities across the country protests were held for Black Lives Matter. They were held for American George Floyd, for 432 Aboriginal deaths in custody and for what some call systemic racism.

The crowds were full of hippies and hipsters.

Young people who had the look of Humanities students more than Law and Commerce ones.

A few even clearly budding media students trying to capture this historic event.

Aboriginal people who have been marching all their lives for their rights suddenly joined by crowds they had never experienced.

People of all races and backgrounds, not necessarily all of the exact same opinion but all united in opposition to inequality.

There were 30,000 in Brisbane at a time when public gatherings in Queensland could be no more than 20.

No fines were handed out as police closed down the streets for the march.

There were no riots although across the country there were examples of minor vandalism and exchanges of pepper spray and arrests.

It appeared almost everybody was wearing a mask and hand sanitisers were on hand as well but given the large numbers – social distancing simply  could not have been maintained at all times no matter how much people tried to respect each other’s space.

Following the weekend Queensland MP Nick Dametto of the Katter Australia Party called on the government to revoke all social distancing fines.

“By not getting out there and fining some people gives a very dark message: you’re allowed to break the rules if you have enough people breaking the rules at the same time.” he said. 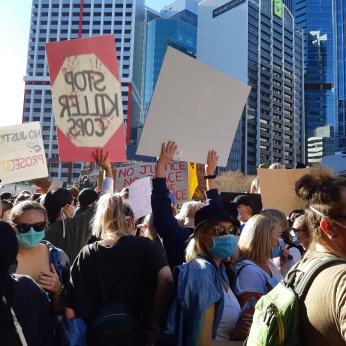 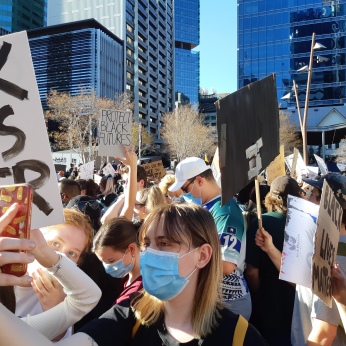 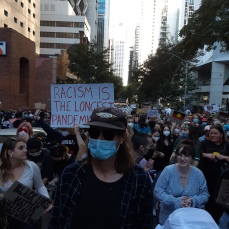 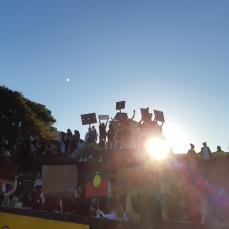 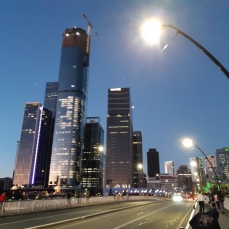 He had a point of course, but then again the fines he was talking about had mostly been handed out during a higher proportion of active cases in Queensland to people who wanted to muck around in the park not protest the unjust murder of black people.

I suspect Premier Anastacia Palaszczuk will be holding on tight in the coming two weeks to see if there is a spike in cases before making a final decision on lowering border restrictions amongst others.

I for one think the authorities made the right call in not choosing to escalate the situation, I’m relieved the protests were not hijacked by troublemakers.

I regret that the protesters felt this was the only way their voices could be heard and went against the health advice of the time.

I really regret that.

The protests were held to address racism, their most immediate impact maybe the hurried lowering of restrictions and the undermining of a possible return to them should the need arise.

The protests will remain a divisive topic, one can only hope race one day will not.

On the 6th of June there were four known active COVID-19 cases in Queensland.

The World Health Organisation reported there had been 7,251 confirmed cases in Australia with a daily increase of 11. There had been 102 deaths.

Very different numbers to other countries that had seen protests too.

In a week when the US leader was clearly protestors from their public city with the full might of police force so he could stand around doing an unplanned photo op where he couldn’t even find some words to say of merit.

My national leader was taking it in all his stride when yelled at by a disgruntled home owner.

Talking up a reno scheme he was assembled in front of a property with press journalists lined up on someone’s lawn to film him.

That wasn’t bloody good enough for the guy inside his house, waltzing out in thongs and tracksuit jumper he asked the journos to move. The Prime Minister didn’t waste a second to apologise and encourage getting off the man’s lawn.

Both the lawn enthusiast and the Prime Minister Scott Morrison exchanged apologies gave each other the thumbs up.

After all the man had just re-seeded!

The disparity between the two images was incredible.

A lone man telling his Prime Minister to move his press conference with a quick apology and thumbs up.

Contrast that with hundreds protesting the injustice of racial inequality of their country only to be forcibly moved so their President could try and save face for his failings.

I’ve often commented on the bulldoggish nature of Morrison as a virtue and a flaw. There was none of that on display here. He couldn’t have risen higher in my estimations.

On the horizon though was another issue for the Prime Minister which would prove more testing. Black Lives Matter protests were starting to take place here in Australia with a march already on Tuesday in Sydney having taken place when public gatherings were limited to 20 people.

On Wednesday there was a candlelight vigil in Brisbane.

Speaking to Ray Hadley on 2GB radio Thursday morning the PM warned against “importing the things that are happening overseas to Australia.” while acknowledging that Australia had problems “in this space” that it needed to address.

He was not wrong, there had been over 432 deaths of Aboriginals in police custody since a Royal Commission was held in 1991.

As the week went on it became clear our political masters were choosing to let mass protests go ahead rather than risk further unrest. This would lay bare either the danger had passed or that the protestors had initiated a new break out. Either way it would undermine their ability to enforce rules going forward as most of them were in a rush to lower restrictions anyway.

We stood at a precipice.

Once again the Prime Minister called on our better natures “We don’t need the divisions that we’re seeing in other countries – we need to stick together and look after each other.”

I was back at work in the office on Thursday too having been away for two and half weeks. I took the chance to pay the money that had been raised on the GoFundMePage to Stellarossa Toowong.

The manager told me the money raised would pay for roughly 112 coffee vouchers but they had gotten 200 and would chip in the rest themselves.

You have to marvel at the kindness of people sometimes.

I started making arrangements with the Media Team at the Wesley hospital to make delivery.

On the 4th of June the World Health Organisation reported there had been 7,229 confirmed cases in Australian with a daily increase of eight. The number of dead 102 with a daily decrease of one. That would be Blackwater Miner Nathan Turner.

In the rest of Europe there were plenty of protests too and in London they were turning ugly with reporters assaulted by protestors or just plain crazy people.

As I watched Nine News Europe Correspondent Ben Avery and camera operator Cade Thompson needing to make a run for it as the crowd attacked them even with a security guard.

Europe Correspondent Sophie Walsh was accosted by a random man who was chased away by her cameraman Jason Conduit.

I urged my sister to stay inside in the coming days.