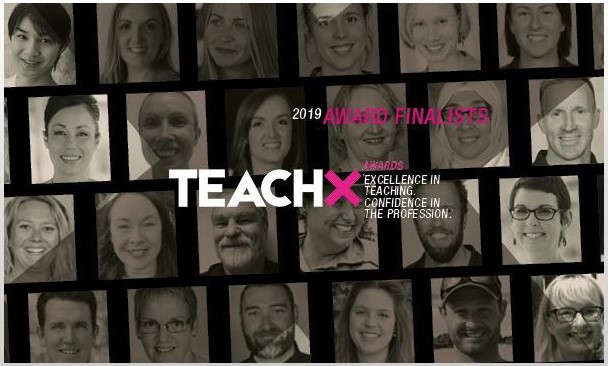 On Friday the 4th of October I completed my secondment of higher duties with the Media Team at the Queensland College of Teachers in support of their work for the 2019 TeachX Awards.  It concluded 10 weeks I had worked full time as a writer for the first time in my life.

In the last two and a half weeks I switched gears from writing about nominees to interviewing 15 of the 30 named finalists and writing media releases based on those interviews. I was guided in this endeavour by the manager of the team who is a former journalist of many years and was preparing the other 15 along with various other work.

The aim with media releases is to have them grab the attention of outlets and good ones can go out with very little changes made by the publication when they print the story. I did what I could and through the efforts of my manager and with some luck, the TEACHX Awards received unprecedented media coverage.

The 15 Finalists I interviewed included the following below of which I placed links to their initial nominee pieces published on the Queensland College of Teachers website.

Excellent Leadership in Teaching and Learning

Kirsti Ellerton from the Brisbane School of Distance Education

Each one of these 15 were extraordinary teachers and first rate human beings, it was just a privilege to speak to them. Their own individual stories were endlessly fascinating and their passion for their chosen profession and the students they taught shone through.

Amongst them were people who had worked in remote communities, flown into burnt out Dili, become teachers after careers as biologists, engineers, lawyers and builders. Others who had known from a young age there was no other job they were going to do.

Whether they were immigrants, windswept travellers, beginning teachers or experienced lifers they all still burned with a passion for educating the next generation of kids.

In the days since my secondment ended I have been updated on where their stories have appeared and will now direct you to links although many are behind paywalls which is fair enough as media outlets strive to remain viable in this digital era.

Media Sponsor The Courier Mail wrote a large article about the Awards and all Finalists.

The Courier Mail also wrote an article about Finalist Cathy Nicholson and online posted an article on Canan Coskun.

7News also did a story on Finalist Tamika Megawatt.

The TeachX Awards were held last Thursday night at the grand old building of Customs House with Finalists, Sponsors and VIPs attending.

84 year old Miss Merline Muldoon was there with the award category Innovation in Teaching recently named after her. I was lucky enough to wait on Miss Muldoon and her sister Janette.

Merline and Janette spoke to all finalists in their category and various VIPs who were keen to talk to them. Merline also presented on stage to each Innovation Finalist their Certificate and then congratulated the winner Jennifer Irving.

We were very lucky to have Miss Muldoon and other eponyms in attendance and I was honoured to spend time with her. She has a remarkable legacy in Queensland education.

A particular proud moment for me was when I was introduced by my manager to the finalists as the individual who had interviewed half of them. I was lucky enough to speak to a lot of them in person on the night.

It was noted by one winner Andrew Peach, on the night, all the positive energy in the air from the event and how we need to take that with us out into the education sector and through out our lives.

The awards had proven once again a success, the next day The Courier Mail printed a story on the winners on their front page and second page, a full feature on page 35 and an editorial piece by QCT Director Deanne Fishburn.

As for me, all I can say is, I was grateful for the opportunity. It bears repeating the event was a huge undertaking requiring a lot of work from a group of strong professionals. The aim was to recognise some of the great work that teachers are doing and to help elevate the profession.

When teachers such as these are involved and the people doing the work are so talented and committed it comes as no surprise to reflect the 2019 TeachX Awards were an unprecedented success.

I was thrilled to be in the room with such people.