Tuesday it was announced that Defense Production Act would be utilised to increase the roll out of vaccinations. Mass vaccination centres were going to be set up including a massive workforce trained up to administer the vaccinations. The goal 100 million vaccinations in the first 100 days of the new administration.

“I gave you my word, we will manage the hell out of this operation,” said President-Elect Joe Biden.

Figures from March and April were now pygmies next to those of October through to January.

The vaccine had arrived but production and distribution was a massive logistical undertaking.

Cathedrals, GP centres and convention centres were all employed.

The UK Government had made the decision on the 30th of December to vaccinate all with the first jab and then proceed with the second jab 12 weeks later hoping to grant more protection across a larger part of the populace faster.

The following is from the British Medical Journal:

“On 30 December 2020, the UK announced a deviation from the recommended protocol for the Pfizer-BioNTech covid-19 vaccine, prolonging the interval between doses from 3 to 12 weeks. Similar decisions were made for the Oxford-AstraZeneca vaccine, for which a longer gap between doses had been shown to improve efficacy in some age groups.

The stated intention was to maximise benefit with limited supplies and to minimise hospital admissions and deaths. For the Pfizer-BioNTech vaccine, the decision to delay the second dose was based on extrapolations from phase III trial data showing an efficacy of 89% 15-21 days after the first dose. At the time, Pfizer did not support the decision, stating that high efficacy could not be guaranteed.

Efficacy in elderly people seems excellent after two doses of the Pfizer-BioNTech vaccine. A longer gap between doses may improve the long term immune response, as seen with AstraZeneca’s vaccine. However, as many people in priority subgroups have not yet received a second dose, any substantial waning of protection during the 12 week interval will create problems as the UK starts to reopen.”

The health care system even buoyed by volunteers was stretched to breaking point.

It was reported that in England on average a new COVID patient was admitted to hospital every 30 seconds.

Like veterans from a war, health care workers who lived through this time would never be the same.

Some were not going to be able to continue in the profession.

Some had paid the ultimate price already.

The next day the World Health Organisation reported 38,905 new cases and 1,820 new deaths in the United Kindgom. A new record.

In the United States of America a piece of political theatre never the less touched me deeply inside.

During a tragedy the debate goes do you focus on what is being lost or do you try to inspire, to revel in a brighter future.

At Christmas time when researching about the history of Christmas trees I read that President Carter had only lit the top star of the National Christmas Tree in 1979 saying the rest of the lights would be turned on when the hostages in Iran had returned. The following year the tree was only lit for 417 seconds, one second for each day the hostages had been held in captivity.

The gesture was very much in keeping with Carter.

But the gesture did not bring the hostages back and in similar years of national pain the National Christmas Tree has not been used to reflect those times but more likely to be seen as constant regardless of the outside world.

It should be noted though that in 2001 the colour scheme was changed to red, white and blue and helping to light the National Christmas Tree were Leon Patterson, 5 and Faith Elseth, 6 who had been victims of the attacks on September 11, 2001.

In 2005 the tree was lit with the help of Jackie, Melissa and Jenna Kantor who started Project Backpack to help children displaced by Hurricane Katrina get new backpacks filled with books, toys and school supplies.

Yet the question remained for me, when and how should a symbolic gesture being made about COVID-19.

After a year of “It will magically go away,” “We’re doing very well,” “Everything is COVID, COVID. After the election you’ll never heart about it again” suddenly on the eve of taking over leading the nation President-Elect Joe Biden and Vice-President-Elect Kamala Harris went to the Lincoln Memorial Reflecting Pool and remembered the dead. 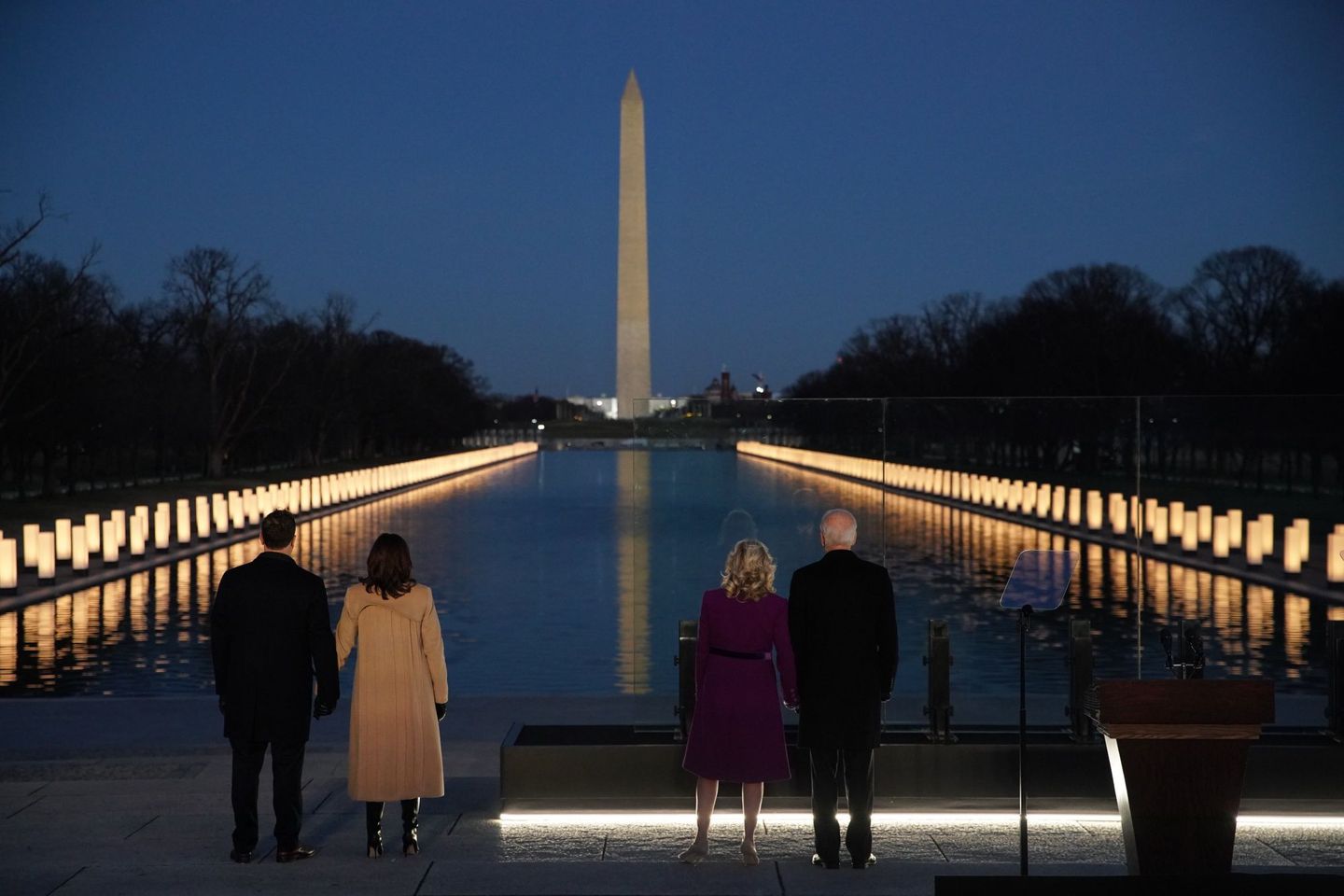 I know a lot of thought and crafted intent went into this moment utilising national iconography known around the world but ultimately the power of it came from the simple truth at the heart of it.

The Archbishop of Washington, Cardinal Wilton Gregory, spoke at the event saying, “At this twilight hour, our beloved nation reverently pauses in supplication to remember and to pray for the many thousands of people who have died from the coronavirus during this past year.”

“We pray for those who have died and the families and loves ones that they left behind. And may it be a resounding gesture of gratitude for all those who have cared for the victims of this virus and their loved ones. Our sorrow unites us to one another, as a single people with compassionate hearts,” he said.

Not to wallow in remorse, not to incite anger and blame, just to allow a nation for a moment to acknowledge a great loss has been suffered. From it could grow a new resolve to strive to save lives and to be grateful for the lives already saved.

As President-Elect Biden said on the day, “To heal we must remember, and its hard sometimes to remember but that’s how we heal.”

Marine One took off from the White House lawn and for the last time with Ballbag on board.

The helicopter circled the nation’s capital, Washington D.C. in farewell.

Referring back to President Lincoln’s Emancipation Proclaimation, Biden set forth his own goals for a legacy.

With a deadly pandemic still raging across the country, a population deeply divided politically and with high unemployment President Joe Biden made a promise.

I noted to myself not long after, a simple acknowledgement that so many people had died and a commitment to do everything they could rather than downplay the threat was sadly refreshing. It’s not a high bar but an important one to clear.

January 21, 2021 the day of President Joe Biden’s inauguration marked one year since the first reported cases of COVID-19 in the United States of America – five of them. 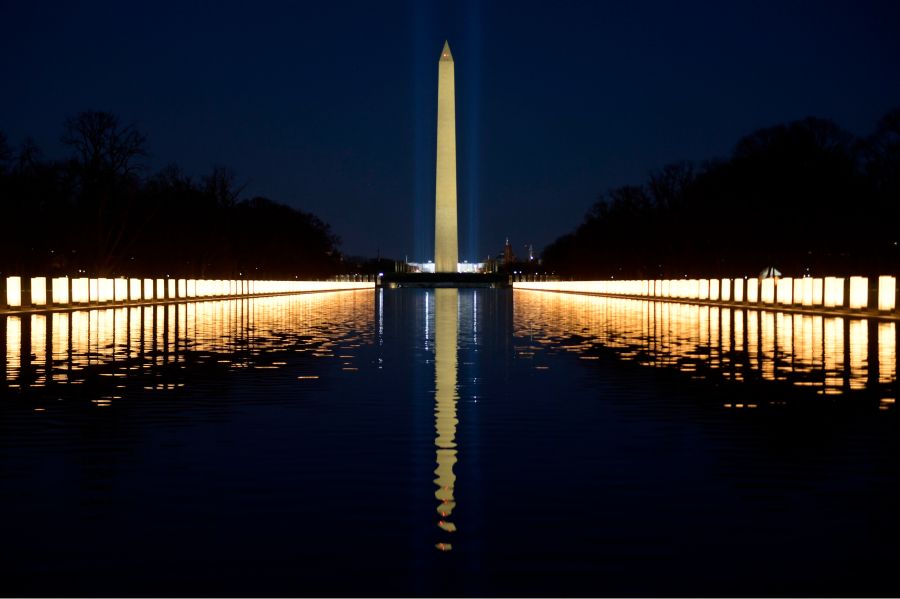