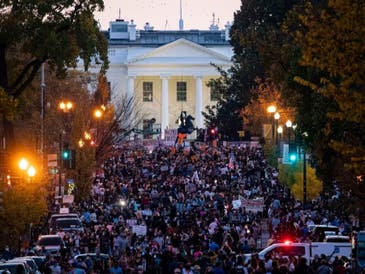 Over the next few days I watched the U.S. election coverage with great interest and a swirl of emotions.
You can’t have supporters show up in one state and insist the vote be counted and in another demand the count be stopped. It becomes very clear that your intentions then are not about ensuring the democratic process.

I don’t like to give into the hyperbole of the moment but it was with some concern that we watched the election coverage and were simply stunned by just how fair Ballbag was willing to undermine the election process and also how many people were happy to step in and support him.

I have worked in the past at elections here in Australia. I’ve stood in a warehouse on election night and counted votes and in the days after. People of all ages, backgrounds and beliefs worked with me. There was a lot of supervision, oversight and cross checking. I couldn’t imagine people chanting outside the building and the need for security at such places doing such work.

Democracy is a privilege and something fragile, I certainly thought so even more during these days.

You can hate on Ballbag if you like but he’s a symptom of something much larger and scarier than just his own misbehaviour and hubris.

I turned 40 that Saturday night. I went out and had dinner in the Valley with some friends at a Chinese restaurant. This was the first time I saw some of my closest friends in person all year. Some the second or fourth time. We certainly felt lucky to do this given what was happening around the world.

In fact walking around The Valley that night past lines outside nightclubs you could have been excused for not knowing there a pandemic was on but there was.

The Valley is on the perimeter of the Brisbane CBD, noted for its night life. I walked past the alleyway where a short film was shot by Kelly Chen. I realised there were 20 years of history with me and this part of the world. I could see clearly where a younger man had had adventures but I no longer was the man, I would much prefer to stick to the restaurants even then and I was eager to get home. It was good to see my friends though.

This is the Chinatown Mall later in the evening after all the restaurants are shutting down so it is emptier than the Valley was. Metres away the nightclubs with queues outside and young drunks wandering around happy and loud. Copyright Lloyd Marken

The next day I awoke to find that former Vice President Joe Biden had become President-elect Joe Biden.

On the 6th of November there was a new record of the daily increase of confirmed cases – 106,050.

On the 7th of November a new daily record again with 116,780 confirmed cases.

On the 8th of November there was a new daily record of 131,821 confirmed cases.

There had been 234,500 deaths with a daily increase of November.

Ballbag went out and played golf. 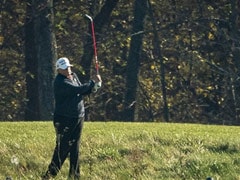 In Victoria Premier Daniel Andrews announced the ring of steel around Melbourne would be gone come midnight along with many more easing of restrictions.

“Victoria will be once again united as one single state,” Premier Andrews said.

This announcement came following nine days of no new cases or deaths in the state. What was referred to as Double Doughnut days. There were only four active known cases in the entire state.

From Monday restaurants and pubs could have up to 40 people inside and 70 outside depending on density. Gyms could have 20. Religious ceremonies 50. Cinemas and theatres – 20 people. Weddings remained ten plus the couple, celebrant and photographer.

Visitors to care facilities and hospitals were now allowed.

The Premier urged people to not become complacent and to get tested even for mild symptoms.

“Nine days of zero is not the same as a vaccine,” Mr Andrews said.

I have to admit I was concerned at the time that they were opening up way too fast but they did only have four active cases something I did not realise at the time.