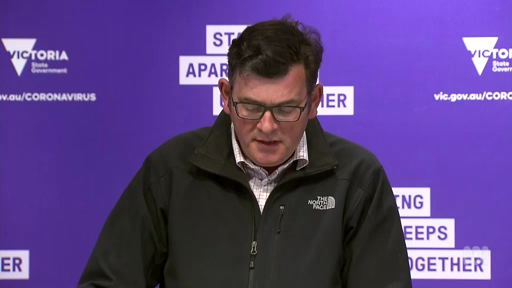 For the first time since June 9, the state of Victoria recorded no new daily cases of COVID-19. And no deaths from the virus.

The day before Premier Daniel Andrews had pumped the brakes on lowering restrictions following new cases in Melbourne’s north including seven mystery cases.

Once again Sky News commentators had a pink fit about the Labor Premier saying how could he do this.

I don’t know… maybe because he didn’t want people to get sick and die and have to stay in lock-down any longer than they had to?

The Premier reported 14,024 tests including 3,196 in those communities had been carried out in the past 24 hours and 1,157 just that morning.

The Federal Government had been agitating for Melbourne re-opening.

“We’ve seen Victoria have a process where they have reached the Commonwealth Chief Medical Officer’s target of under 10 cases a day on a rolling average, they’ve reached their own target of under five cases a day. If they do believe in their contact tracing system, then there is no reason not to move to the next stage and to do so today,” Chief Health Minister Greg Hunt had said pointing out that the state government who had endured the longest lockdown in Australia had given themselves a higher target in hopes of stabilising the spread of the virus in the community, more so than the federal government.

The 14 day rolling average of cases in Melbourne was 3.6 and in regional Victoria 0.2.

The tests had all come back negative.

The Australian Broadcasting Corporation was quick to report the economics of it all.

It told us the Commsec State of the States Report had cultural powerhouse Victoria from second to third in the economic ranking of states.

That consumer spending was so low that Victoria had gone from second to fifth in the Retail Trade category.

Unemployment in the quarter was 6.7 per cent.

The Victorian Shadow Treasurer Louise Staley pointed out, “We’re behind Tasmania and the ACT and it’s driven by collapse in business investment and this unemployment.”

Which you know is related to…. oh yeah – a pandemic!

Maybe Tasmania being the best performing economy in the country for the third month in a row had something to do with the fact they had not had one case of coronavirus for 75 days.

Which I’m sure these pundits were aware of but they seemed to fail to make the connection that one leads to the other not the other way around.

So Premier Daniel Andrews fronted the media for his daily press conference and presented different statistics that hold far more importance for him, for me for anyone who values human life.

There were 91 active cases across the state and there were zero new cases. It seemed his voice cracked a little as he advised it had been 139 days ago since that had happened.

There were seven Victorians in hospital and he was pleased to say none of them were in intensive care.

There had been over 3 million tests in Victoria and over 14,000 since yesterday.

Can you imagine, lockdown, testing, mandatory wearing of masks. In the UK I’m being told about people testing positive in schools and year levels going home. Has anybody actually ever been in a school? One positive case here and a whole school locks down.

There were six health care workers with active cases of COVID-19. The Premier wished them well and thanked them and their colleagues for their service.

There were now just four active cases in residential aged care and the vulnerability and loss of the elderly was highlighted by the Premier.

The Premier announced the following of lowering restrictions for Melbournians who had been in stage 3 lockdown since 09JUL2020 and Stage 4 since 02AUG2020 would lift come 11:59pm Tuesday 27OCT2020. The four essentials reasons to leave home were gone. You could leave your house for any reason.

You could leave your house for any reason.

My how the world has changed.

More than two households could catch up outside but with a limit of 10 not including babies.

From Wednesday beauty and tattoo parlours could re-open if masks were worn by all.

Outdoor contact sports for 18 and under will start-up again as will non-contact sport for adults. PT, Fitness and Dance classes could be held outdoors with ten people. Outdoor pools could have 50 people depending on density.

Libraries, community venues would be open for outdoor events as well as entertainment venues within limits.

Faith communities could hold outdoor ceremonies for up to 20 people plus the people running the service. Indoor could have ten people.

Weddings could have 10 people and funerals up to 20.

Masks would remain mandatory and people will still be encouraged to work from home where possible.

Years 8 to 10 had returned to the classrooms that Monday with one student Turker Cakal noting, “They had enough of me, I’ve been home too long.“

There were reports of cars honking at school pick-up as the announcement was listened in car radios. People cried.

Premier Andrews advised he would provide clear instructions on how home visits would be conducted on Tuesday.

He did warn, “We must understand, all of us — the most dangerous environment for the spread of this virus is in your home. When you have visitors, you let your guard down, and they go back to their house, they have visitors and all of a sudden there are chains of transmission that spread silently.“

From the Premier’s prepared statement he advised further changed for November 8 as regional Victoria and Melbourne became whole.

The “ring of steel” around Melbourne was on track to be removed 11:59pm Sunday the 8th of November.

“The state will be one again,” Mr Andrews said.

The capacity of pubs and restaurants will increase, with up to 40 inside and 70 outside.

Religious gatherings will expand with up 20 people and a faith leader indoors, and 50 outside.

Gyms and indoor fitness will be able to reopen – with some strict safety precautions in place.

And because Melburnians will have well and truly earnt a holiday, accommodation will also reopen.

The border between the city and the rest of our state will also fall away.

I know personally – deeply – just how much this will mean for thousands of Victorians who haven’t been able to see loved ones for far too long.

In relation to the testing blitz and pumping the brakes Andrews said, “We took the time to wait to make sure we did not have widespread community transmission in the northern suburbs. It was worth waiting to be absolutely confident, to be sure that our team had their arms around those positive cases and fundamental control of the outbreak, and that is exactly what these numbers show us.“

The Premier pointed out that the freedom and stability that had been reached was fragile and the responsibility of all Victorians to protect and accordingly he acknowledged it was the achievement of every Victorian and deflected any praise suggested for him as the leader of his state through this tremendous crisis.

“Fundamentally this belongs to every Victorian.“

“These are big steps, we’ve all given a lot. I’m so proud and impressed and humbled by by the contribution that so many Victorian families have made, so many Victorian businesses have made. If this is to mean something then we have to take our COVID responsibilities to stay safe and to stay open, to stay safe and to stay connected – we have to take those responsibilities seriously.”

“There cannot be bending of rules, they cannot be people on an endless search for loopholes. We are all in this together and just as we have stayed the course and yes we have stayed apart but remain fundamentally connected as a strong and united state we have to be vigilant in the weeks and months to come. Until a vaccine comes – there’s no normal there’s only COVID normal.”

“So much has been given to build this precious thing and all of us need to make sure we honour it and value it and protect it in all the chances that we make every single day.“

“I could not be prouder than I am today to lead a state that has shown the courage and compassion and the character to get this job done.“

“But it not yet absolutely finished. Only a vaccine can give us the ultimate protection against this so we need to be proud today, we need to be optimistic, we need to be confident but we also need to be COVID safe and I’m very confident that is exactly what Victorians will do.”

“A zero case number today is not the same as a vaccine against this. We all need to keep our guard up. We all need to be very careful about how we safeguard this precious thing that we have built as a Victorian community because we have stayed the course.“

“Because we haven’t been pushed by the loudest voices in our community into making irresponsible choices. The decisions we’ve made have given us the number that we have got today, all of us, the sacrifices we’ve made and now we just need to lock that in by making smart choices for the future.”

In March at the beginning of lockdown Premier Andrews had remarked that you can’t have mates around to get on the beers.

A reporter asked him in the press conference, “Can I confirm you are saying we can finally on the beers?”.

Andrews wryly replied, “I might go a little higher up the shelf.”

This was a great day for all Victorians, they had endured, they had triumphed. However fleeting, this victory was hard earned and their own.

My condolences. My thanks. My admiration.