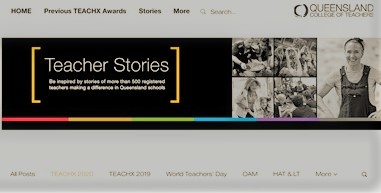 The TEACHX Awards are held annually by the Queensland College of Teachers to recognise some great teachers in our community and to elevate the profession.

In the year of COVID-19, the need for teachers to be flexible, hard working, innovative and dedicated to the education of students was on display more than ever.

The QCT received close to 400 nominations of which 74 nominees were shortlisted.

In each of the six awards categories there were five finalists.

Out of those 30 teachers I personally interviewed 15 of them and drafted 14 media releases.

These are their stories.

Excellence Leadership in Learning and Teaching

Donald Cameron – Donald Cameron was a lovely teacher to talk to, he is highly intelligent and can break down big concepts centred around the way the brain works that make it highly relatable and practical. He was fascinating to listen to and has contributed to the mindfulness of teachers and students at his school.

Keith Graham – Keith Graham has the distinction of being the second person I have interviewed twice. I interview him in early 2019 for QCT when he received an Order of Australia Medal (OAM). Our conversation then covered the positive role sport can play in the development of young people. Now we discussed the International Baccalaureate Program, dived deeper into his early years, his role as a Principal and ideas around leadership and building school communities. Graham is a first rate speaker, articulate and concise but also expansive on his points. It’s a dream to interview him but the best part is clearly hearing his passion as an educator and building up people of all ages to reach their best potential.

Ben Habermehl – It was great to chat Ben, an extremely dedicated maths teacher who has made a significant difference to the maths department at his school and the students who learn there. His school, Yeronga State High School partnered with Griffith University in the research project Y Connect which saw artists engaging students in maths through movement with tremendous results particularly with many students whose first language is not English.

Gavin Jones – Gavin Jones like every other teacher I interviewed was wonderful to speak to. An arts teacher who set up the second remote pilot course for high school students in Australia and the first in Queensland. Jones who obtained his Commercial Pilots Licence in the early 1990s, has put his school on the map with the program. He was full of amusing stories and we discussed the impact that teachers can make in a student’s life.

Cameron Lynch – Have you heard of eSports? Well I hadn’t. But it is a growing billion dollar industry of video game tournaments where players are paid to compete professionally. More importantly the industry employs many to market, plan, run such tournaments in a range of specialities with universities offering scholarships, running tournaments, putting together teams and teaching skills for the sector. Thanks to Cameron Lynch students in his high school are doing the same building inroads to tertiary study and industry careers. A teacher with a vast array of experience and great dedication, it was magic listening to him recall a moment coming out of COVID where two of his students reached the grand final of an eSports tournament and they arranged 100 socially distanced peers to cheer them on in the school’s auditorium.

It will always remain an honour to have interviewed these wonderful teachers.