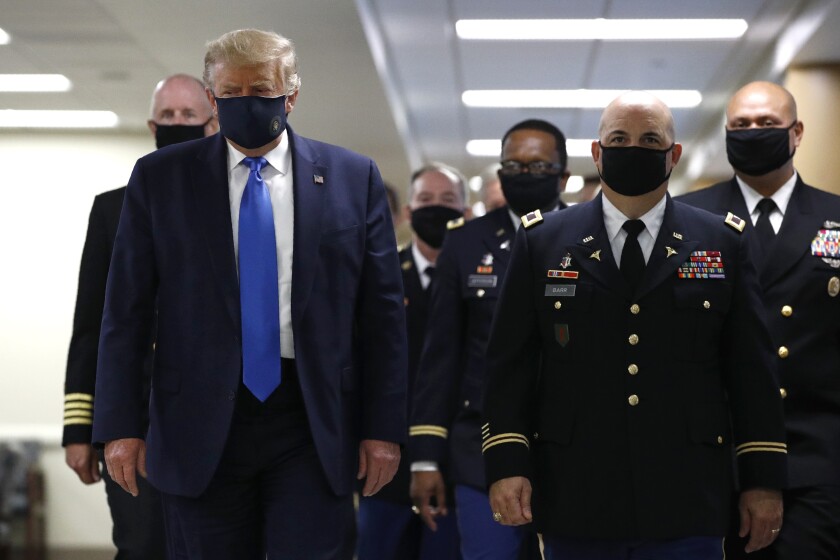 In early April when the Centers for Disease Control and Prevention issued voluntary guidance to wear masks Trump said, “This is voluntary. I don’t think I’m going to be doing it. I don’t know, somehow, sitting in the Oval Office behind that beautiful Resolute Desk – the great Resolute Desk – I think wearing a face mask as I greet presidents, prime ministers, dictators, kings, queens, I don’t know. Somehow, I see it for myself. ”

In May when Ballbag couldn’t hear a journalist’s questions he said she was wearing a mask to be “politically correct.”

When he was at the Ford plant to May he wore a mask but not where there were press. Already he was saying that he “didn’t want to give the press the pleasure of seeing it.”

In early July he noted of Joe Biden of wearing a mask, “got the largest mask I think I have ever seen. It covers up a big proportion of his face.”

There is an argument to be made that with regularly daily testing of White House Staff the President didn’t need to wear a mask and it projected strength and confidence to the American people.

White House Staff did test positive however and Trump’s actions politicised the wearing of masks.

With a few strong comments Trump could have ended but he didn’t.

Then the COVID numbers went up him in the heartland and Republican politicians started wearing masks.

So with poll numbers down and it being identified as a simple and necessary move – he  did it.