Richard Curtis was recently on The Late Late Show with Craig Ferguson.
The two of them go back a bit to when Ferguson was large alcoholic comedian and Curtis was the writer of the Blackadder and Mr Bean TV series.

Surprisingly their patter was strained. Ferguson made jokes at his own expense about times when he was suffering from his disease. Curtis at one point said I believe quite genuinely “I’m so happy to see you doing so well.”

Curtis understood the need to be funny on the late night talk show but he couldn’t trivialise the depths Ferguson had recovered from nor the heights he had scaled since. It revealed a part of his nature that has been evident in his work since the beginning. Curtis can do funny but he is quite prepared to acknowledge the harshness of life as he did in the interview and as he has in his work.

Curtis was the writer or arguably the best romantic comedies of the past two decades, certainly of those from Great Britain.  Four Weddings and a Funeral, Bridget Jones Diary, Notting Hill and Love Actually all contain themes of courtship and the trend continues in his new film About Time. Curtis has publicly stated this could be the last romantic comedy he directs. Like Clint Eastwood’s last western Unforgiven, Curtis approaches this film as if to make a final point on the sub-genre that he helped establish. Domhnall Gleeson plays a young man who on his 21st birthday is told by his father that the men in the family can travel through time to any moment in their lives. They just go hide in an enclosed dark space (preferably a closet ) and concentrate really hard. Tim decides he will use this gift to find love. We follow him as he falls in love with the lovable Mary played by Rachel McAdams. Their courtship takes up the first third of the movie and the hook of the trailers has had Domhnall doing over awkward date mistakes. Stuff up the first time you have sex. Go back and do it again. Say the wrong thing when meeting the in-laws for the first time. Go back and do it again.

These scenes contain the bulk of the wit that the British writer has shown in abundance ever since the Blackadder series. Yet Curtis as hinted at by his interview with Ferguson is aware of the tragedy or pathos of life as well in his work. . ‘Four Weddings’ as it is often shortened to, after all also had A Funeral. After making us laugh all throughout Blackadder Goes Forth with over the top characters the series ended with a poignant reflection of what happened to so many on the Western Front all those years ago.

His most ‘ROMCOM’ romantic comedy Notting Hill still has a close friend to Hugh Grant’s lead confined to a wheel chair following an accident.

His ensemble masterpiece Love Actually features several people recovering from or tempted by adultery and the human cost this entails. Not to mention a father and son grieving over a premature death and a sister making sacrifices in her private life to be there for her brother who needs her. Life is not pub fist fights, spectacular cross country road trips and Vegas skydiving. Instead of being full of James Bond derring do life’s most dramatic incidents can be car accidents and hospital visits that can knock the trajectory of our destinies away from us. His heroes and heroines don’t kiss for the first time in front of the Eiffel tower but in a back street of Notting Hill or a small cafe in Spain and it’s just as spectacular and romantic because it’s our lives.

The film is a Richard Curtis film as we’ve come to expect but by adding an unusual sci-fi element of time travel Curtis now in the middle of middle age goes deeper.

Here even before the courtship of Tim and Mary we are introduced to the family and given the set up for pay offs later on. The pathos will go deeper this time because we see the whole journey. The zany free spirited sister Kit Kat played by Lydia Wilson  for example may be zany for more than one reason and it could be masking deep hurt. On The Late Late Show Curtis casually remarked “It’s about the meaning of life.” masking the accuracy and profoundness of this statement.

The film gives way gradually to what happens after you fall in love. When you build a life with someone and have children. Children are of course the rebirth of the line that you are linked to through your parents. As the circle of life rolls over one must give way to the other. All of that is on show in About Time…yes people there will be a wedding and a funeral.

McAdams is one of the most wonderful actresses working in Hollywood today but she’s been stuck as the love interest too much ever since The Notebook. (A great turn in career comedy Morning Glory playing off two vets in Harrison Ford and Diane Keaton rather than her love interest failed to register with audiences). Notable exceptions include when Woody Allen invited her to play against type in Midnight in Paris and when she held her own against Sherlock Holmes.

Here she is the girl again, super cute and a little feisty but she gets to play new notes as a Mum and see the warmth in her as she sits next to her sister in law and agrees she needs to make a change to her life.

Domhnall Gleeson is so subtle in his performance here that you may take for granted how easily he slides from awkward teen to concerned brother to doting father. He provides voice over narration that never oversells anything and yet easily recognises the beats of our hearts. It is because of him that we feel this family of his is just like our own. We may not recognise every personality type but we do recognise the love they share for each other.

You will laugh out loud as Tim slyly comments of another would be suitor being a dick literally minutes of screen time after we have seen him distressed in an alternate time line after being usurped by this man as her established boyfriend.

Yet notice how his stern and yet frightened gaze directed at his sister’s boyfriend is years away from the boy who squirts sunscreen all over the back of a girl he is trying to woo.

I have no doubt the time loops and logic are inconsistent as the film goes on. But to the people who would look to dissect I say wholeheartedly I couldn’t give a shit. The time travel element is a story device more than anything else. Logic aside there are some neat touches, one is despite Tim’s special power he cannot always get the outcomes that he wants. An obvious one  is if somebody doesn’t like him his power can do little to change that as displayed early on. However notice later on Mary tells him not to scamper off during a crisis. It hints that Mary is no fool and while she remains out of his time travelling some things are still becoming obvious. It’s a legitimate question to ask how can this man have this ability and not come clean with his significant other about it but watch the film and see Tim’s ultimate decision about time travelling and you may get why.

I never once felt this film didn’t present their relationship as equal, grown up and complex despite a scence where yes McAdams tries on twenty dresses before going with the first one. By the way the first would’ve been my pick too.

One montage shows the central couple in the first bloom of love walking through their local train station throughout various days. In one shot she twirls around as he holds her hand. Later we see frustration spilling out from within them and at each other after one of their kids has torn up a project for work. Late night dates will give way to people being grumpily woken up following nights apart because someone has something ‘reaaallly’ important they need to discuss with you. The fumbling of first time sex will give way years later to jokes about whether it should be done tonight or not.

My God we do twirl around in those first few heady days but because of that a hand being held all that time later at a funeral by the same person lets us know of a different passion, a different love but one just as powerful and far more lasting. We are all twirling around train stations at some point, before holding hands in backyards and on beaches as the day goes by. Smiling without having to say a word. Maybe even on instinct spinning once more because you remember. Because some feelings don’t leave us.

One more thing. Bill Nighy who Curtis made a massive star out of with Love Actually here plays the father. Perhaps to right the wrong from The Boat That Rocked a film that touched upon fathers and sons but failed to choose Nighy to be the father nor to nail nearly as wonderful a depiction of that theme as this film does. I’m not giving anything away to tell you that the central relationship of this film is arguably not really between Gleeson and McAdams.

Nighy is an actor so beloved that when he shows up in a movie you can’t help but smile. His first line had me grinning even though he wasn’t saying anything funny. I was just so happy to see and hear him. Such an effect from an actor makes him perfect casting for the role of the father. The world loves Nighy and that love will give the film absolute weight later on when he tells Tim what he used the gift of time travel to do with his life. Because if you’re a father and you can travel through time that is exactly what you would do. 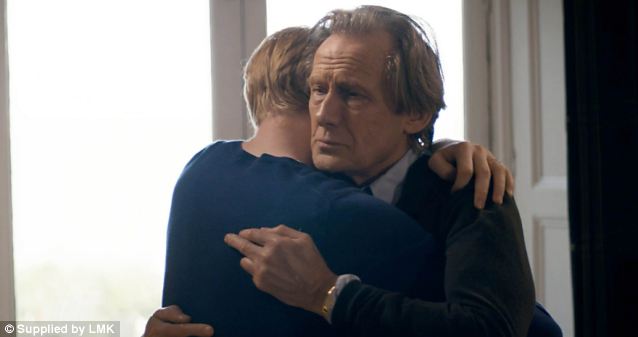 15 thoughts on “The Absurdly Appropriately Titled ‘About Time’”